Each visit or new archeological find connects them to their Haíɫzaqv ancestors, reminding them continuously of their intergenerational presence and spiritual and cultural rights and fortitude.

“I’m an independent archeologist. I live and operate out of Bella Bella,” says Q̓íx̌itasu as he and his skipper wait for his nephew who jumped on shore. “Charlie is looking at the base of this bluff for rock paintings, carvings, and burial boxes.”

These are all artifacts they’ve found throughout their Haíɫzaqv (Heiltsuk) territory, some identified by other archeologists before, marked or mismarked on maps, some they are identifying for the first time. What matters after the find, Q̓íx̌itasu says, is the interpretation one makes of it. 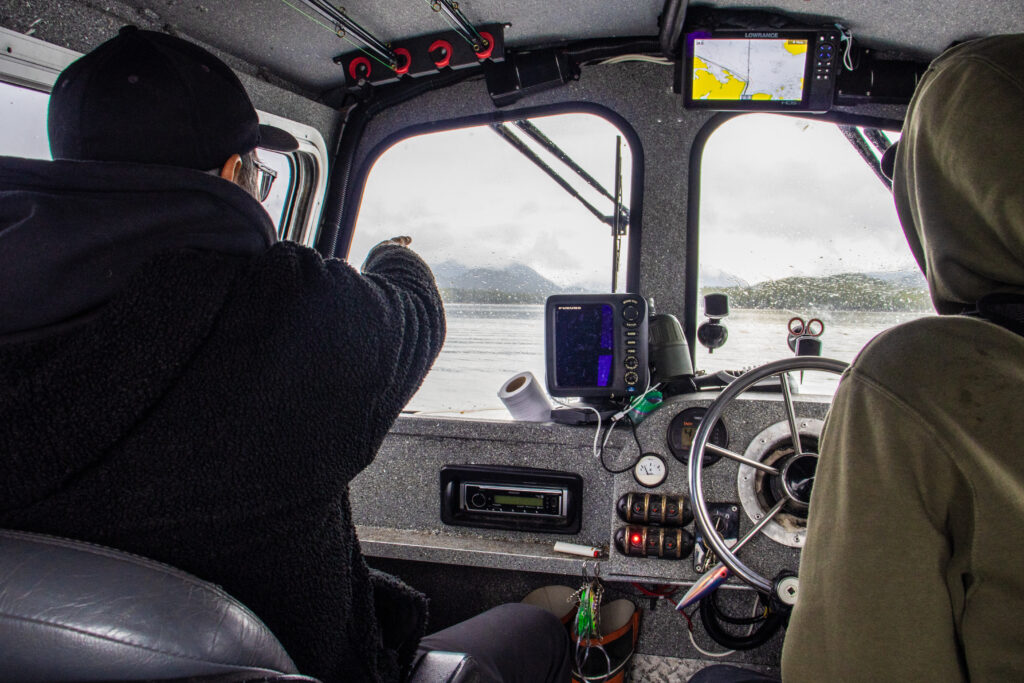 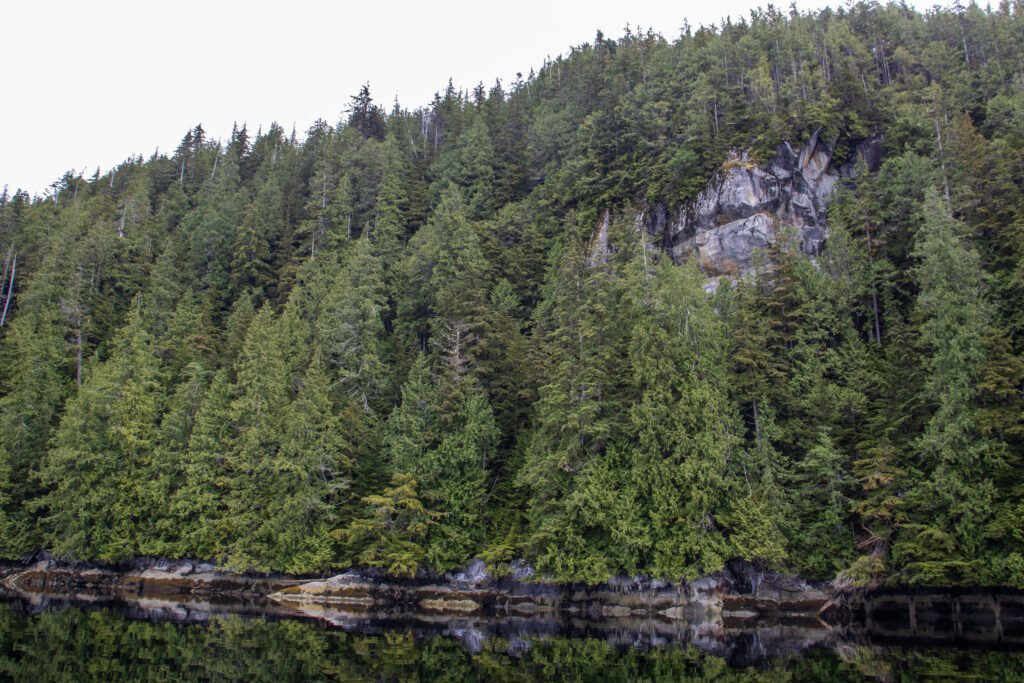 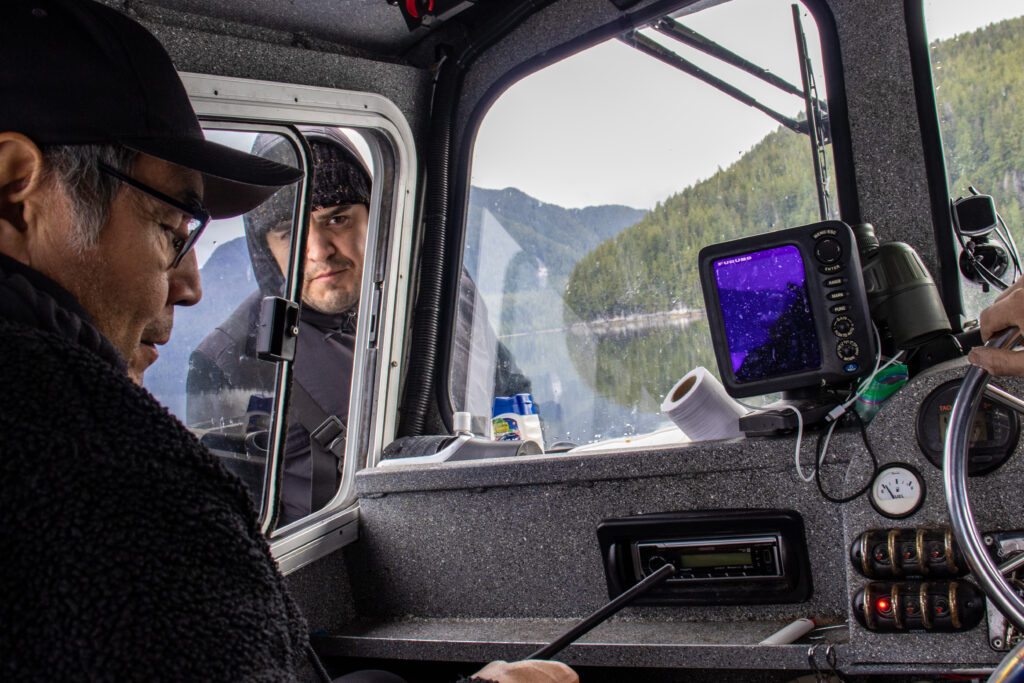 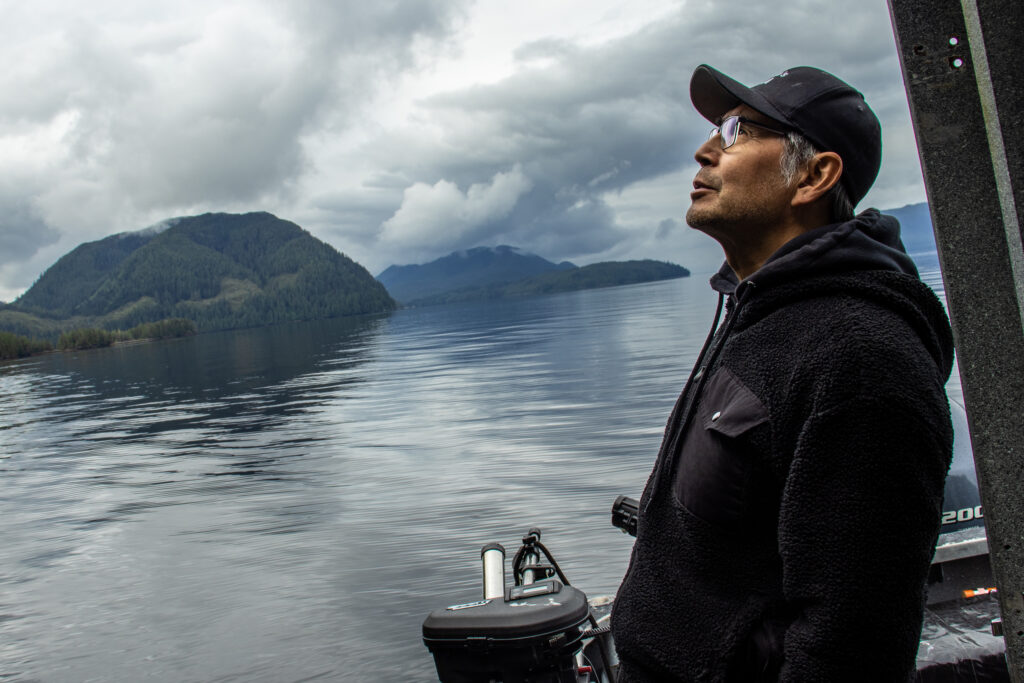 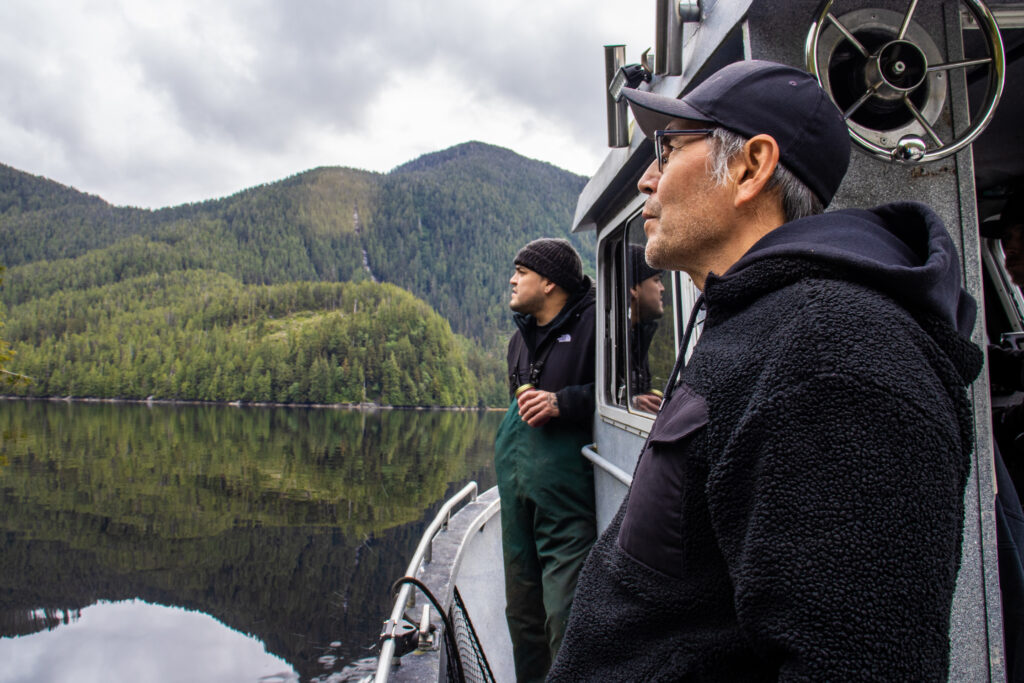 Q̓íx̌itasu has a Master of Arts in the Department of Archeology from Simon Fraser University. His thesis, ‘Heiltsuk Stone Fish Traps: Products of my Ancestors’ Labour,’ incorporates local Haíɫzaqv political and cultural entities and the stories from 12 Haíɫzaqv oral historians.

“According to Heiltsuk oral history, we have used and occupied this diverse marine environment and landscape, including rivers and offshore waters, since time immemorial,” writes Q̓íx̌itasu in the introduction of his thesis.

“We are reminded continuously of our ancestors’ presence. Old village sites, rock art visible on cliff faces and carvings on slippery rock surfaces, scars from bark strips on cedar trees, burial sites and stone fish traps are the remnants of their tenure.”

While archaeologically, ancestral sites and artifacts tell a story of the presence and continuous use and occupancy of a Nation group, Q̓íx̌itasu says that from a Haíɫzaqv perspective, there’s more ceremonial, cultural and social information that’s shared internally.

“Anybody can look and find. The important part of being an archeologist is that you do the analysis, the lab work, the reporting and then you come up with an interpretation,” he says. “My work includes way more important parts than just looking, searching.”

Q̓íx̌itasu practices what he has come to identify as a M̓ṇúxvit approach to the work. M̓ṇúxvit is a Haíɫzaqv word that loosely translates to English as “uniting, becoming one.”

There were many times throughout his studies and field work he realized his cultural protocols and context governed his work differently than other archeologists. In his research and work, Q̓íx̌itasu combines many approaches, practicing a new, yet ancient methodology, uniting many ways of doing things into one. He consulted Rory Housty, a Haíɫzaqvḷa (Haíɫzaqv language) speaker and teacher, and Elizabeth Brown his mother-in-law (fluent Haíɫzaqv speaker), explaining his methodology, to find the appropriate Haíɫzaqv term for his practice.

“The fact I use a Haíɫzaqv word empowers me. That’s how my ancestors would have done it, they wouldn’t have used an English word. I use our language to help interpret these sites created by my ancestors rather than the English words that tend to lose their meaning,” he says.

When Q̓íx̌itasu and Charlie arrive to a burial site and point to some of the artifacts resting there — a rattle, pieces of a box with formline drawings, Q̓íx̌itasu chants. “I have ancestry here, I have protocols I must follow,” he says. Sometimes, it’s his nephew who gives him the nudge if he forgets to sing. Younger generations are often taking up protocols others do out of habit or respect, he says, but they really mean it.

“We do that when we come to a village where we know a song came from, or we’ll do a dance on the bow, we’ll chant, it’s so empowering, it brings life back to these places.”

Charlie, Q̓íx̌itasu’s nephew, who’s the co-founder of a growing Haíɫzaqv art and clothing company HstryMkers, says it’s not that they “don’t like outsiders coming in,” but having Haíɫzaqv people identifying their own ancestral artifacts charges the work with a different meaning. 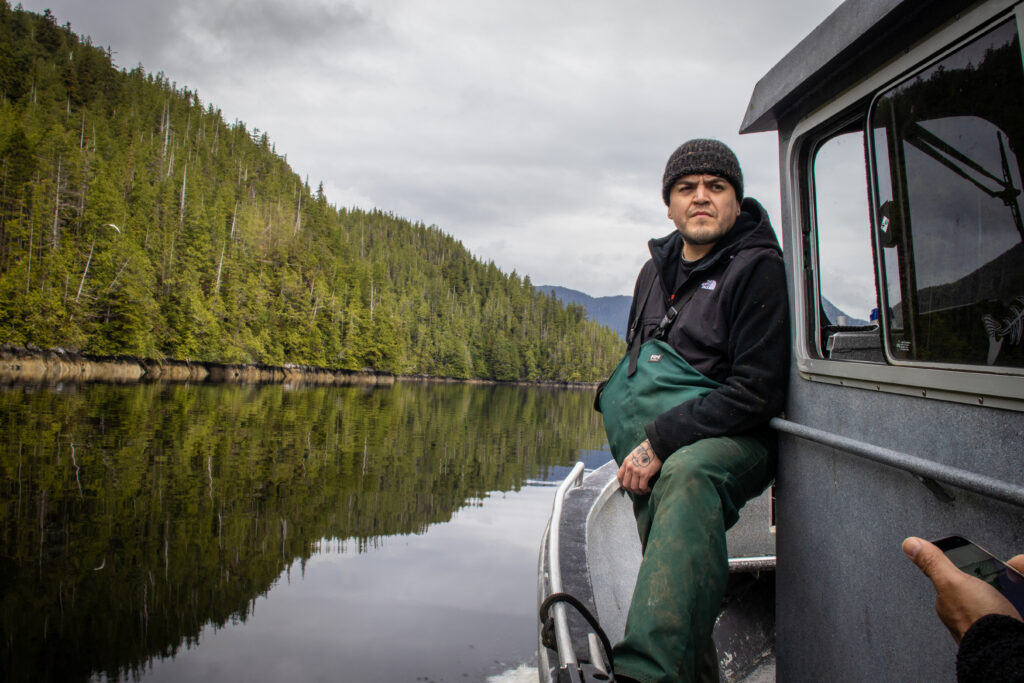 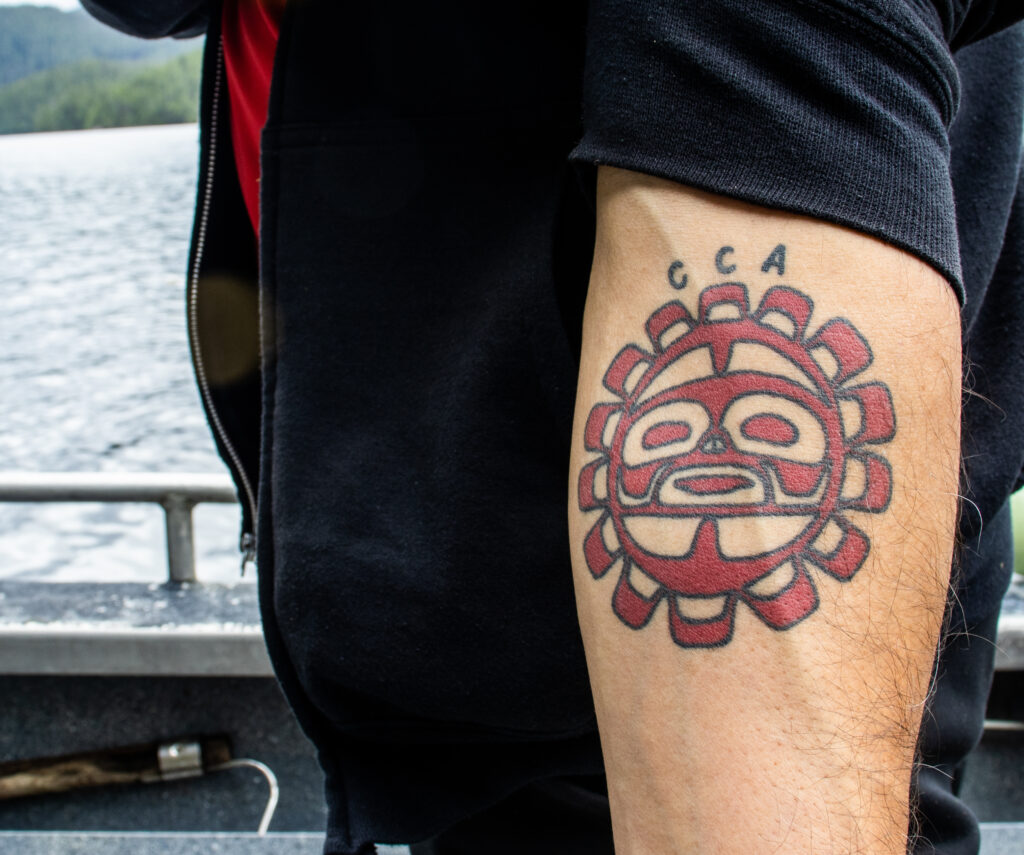 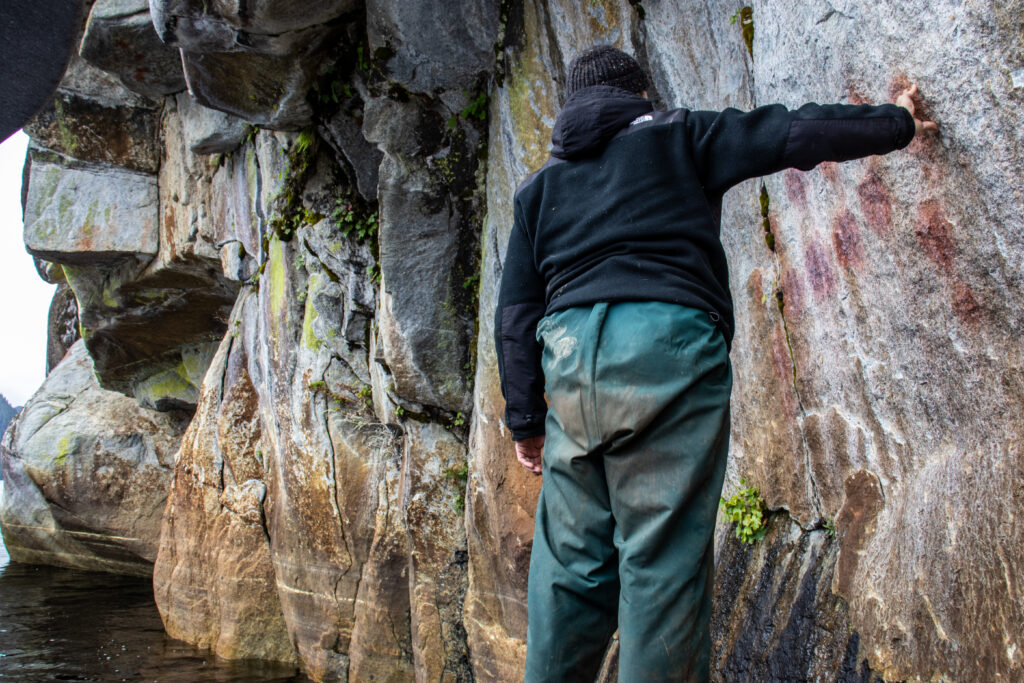 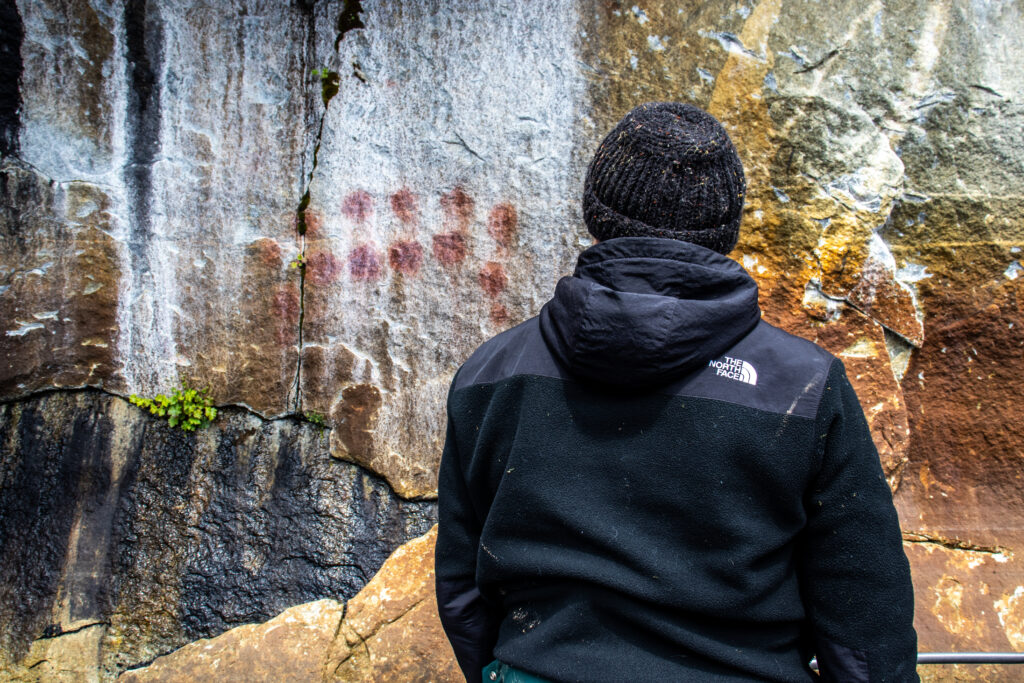 The tangible and intangible

Other major differences Q̓íx̌itasu encountered in his research was the way that people were documented, analyzed or cited by archeologists.

“Everything was from the scientific approach. It was acceptable to be going into burials and taking things that didn’t belong to them for their analysis and later for their own interpretation,” he says. “Often they would throw in a tokenism about the Haíɫzaqv, or wrongful interpretation to Kwakwa̱ka̱ʼwakw  or Haida, Tlingit, etc.”

In his research, Q̓íx̌itasu would come across information that wasn’t appropriately sourced. He’d find the name of the person who conducted the research, but not always the person who provided the knowledge.

“Any researcher, we’re trained to build on what’s already existing, but that also includes the oral history, who said it before,” he says. “I knew when I wrote my thesis I would quote people perfectly, the way we do it in our potlatch.”

“When you’re sharing knowledge in a potlatch, you say ‘this song belongs to, this history belongs to,’ and you have to say the name, you can’t blurt out information without acknowledging that sort of thing,” he says.

He doesn’t fault the “people who did the work previous to us,” he says, but a place-based cultural interpretation adds important information to the pre-existing database. His work extends beyond the physical artifacts, the main focus for many archeologists — it’s about the tangible and the intangible, he says.

Łáxvái means strength or right of descent, he says. It’s a term and concept fundamental to the potlatch governance system and remains rightfully present in his work. Q̓íx̌itasu uses his culture, potlatch knowledge and history and puts it into the reinterpretation of these artifacts.

“All of those physical tangible artifacts were made through Łáxvái, through the strength and right of these people to make an artifact. Selection of these places wasn’t based on preference, it’s because an ancestor descended down and the descendants inherited it,” he says. 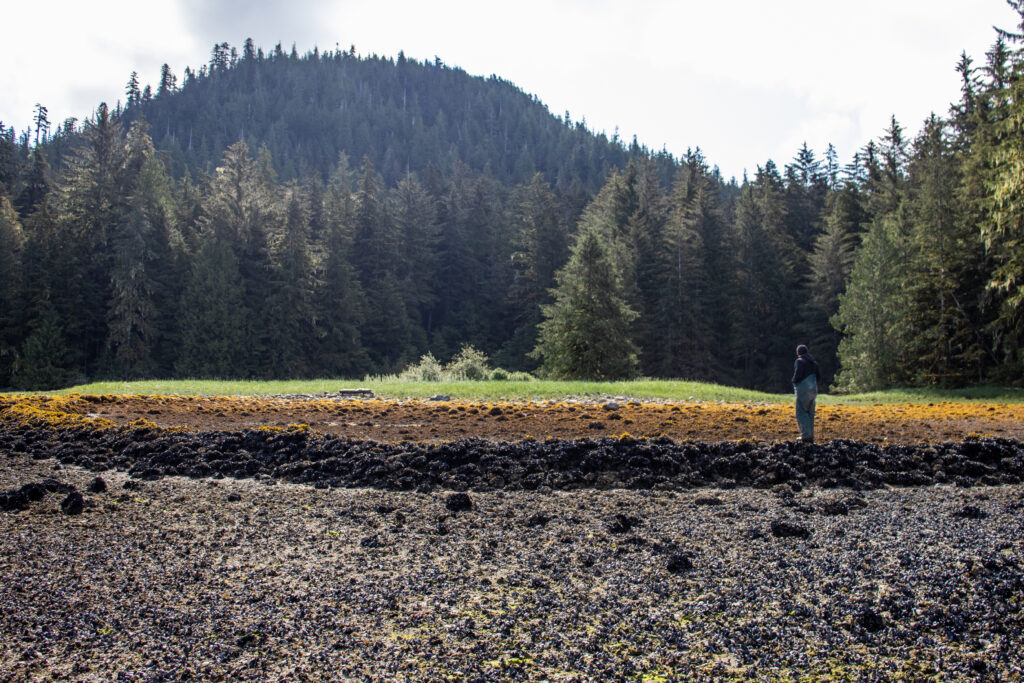 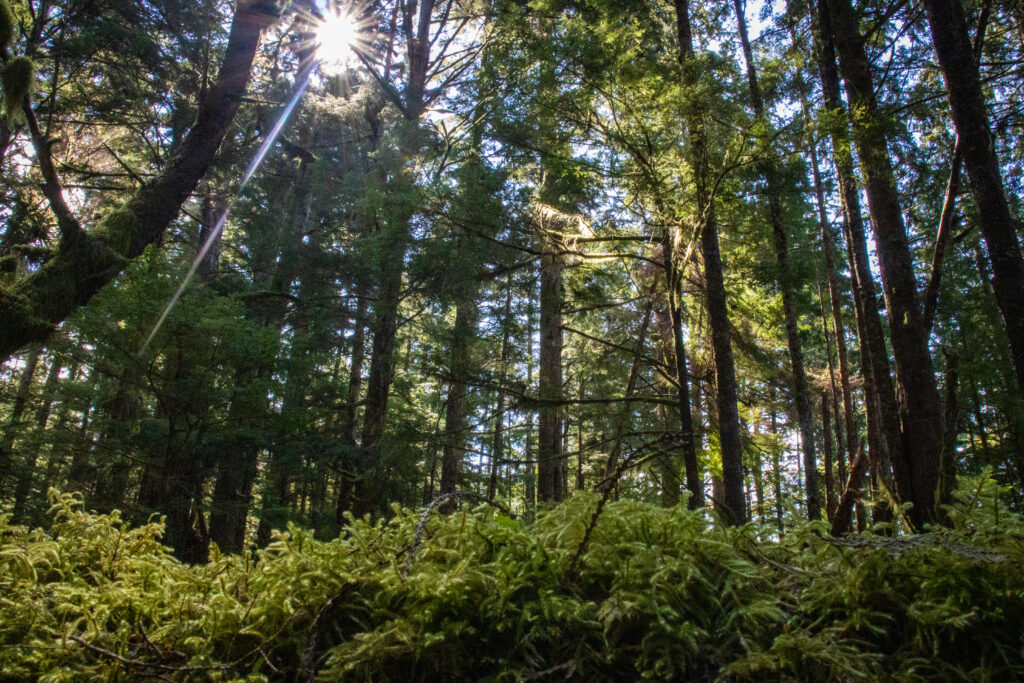 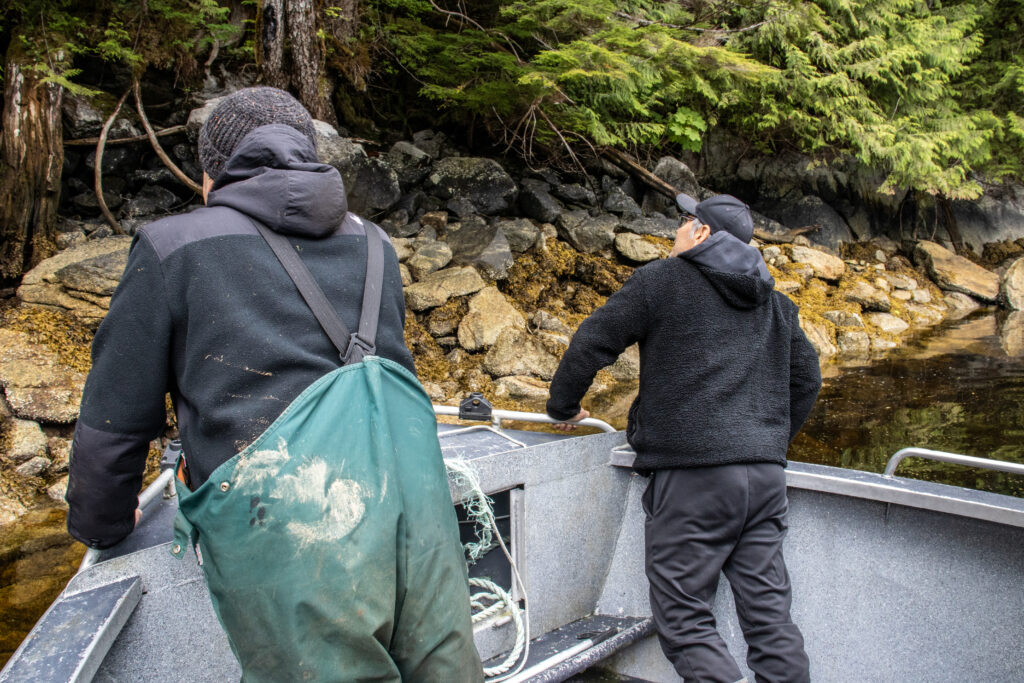 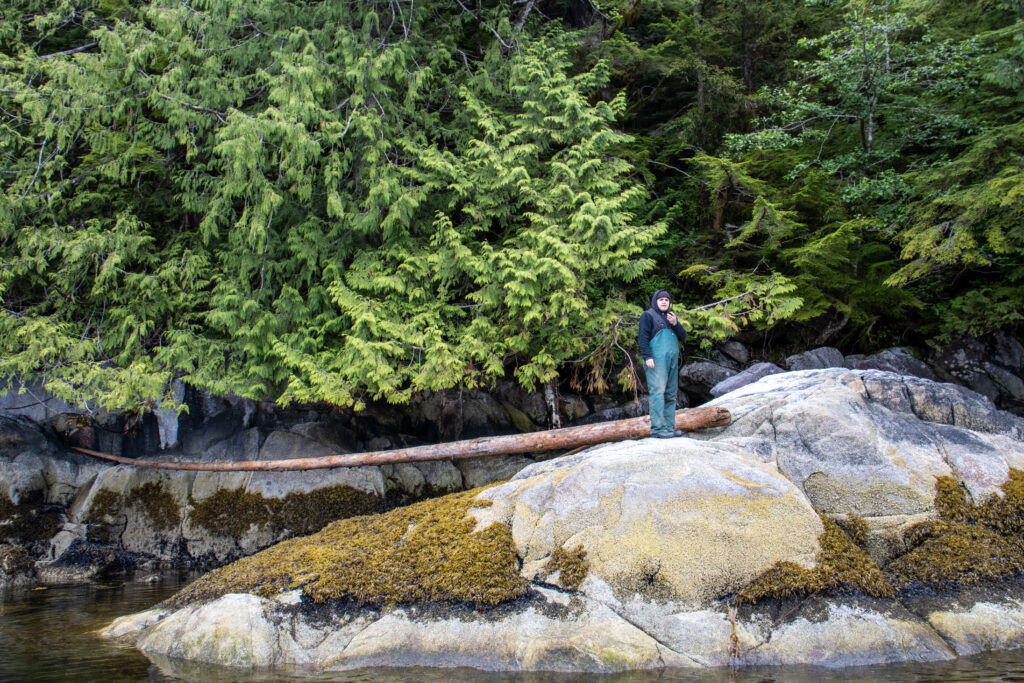 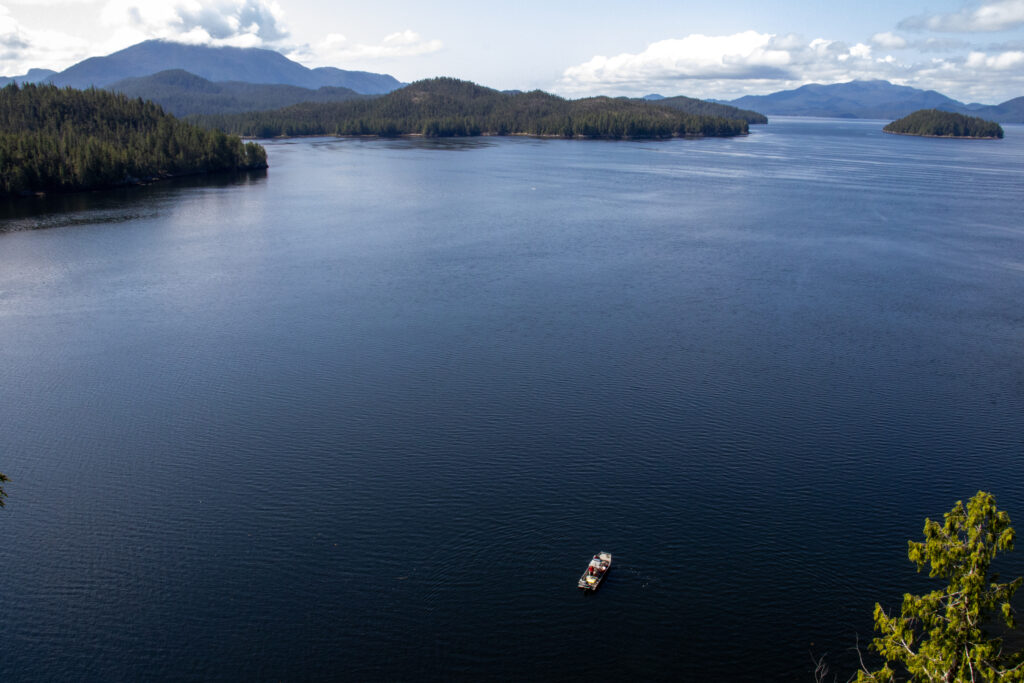 Q̓íx̌itasu admits to sometimes feeling isolated in the work. He’s proud to be an archeologist, he says, and he fits in with others in his field to an extent. But there are aspects of his M̓ṇúxvit approach that others can’t relate to. He’d love to work with more archeologists from neighbouring Nations, he says, and compare their finds, culturally-based approaches and interpretations.

“I have struggles internally and externally, and have to find that balance,” Q̓íx̌itasu says. “That balance is the M̓ṇúxvit approach.”

He engages with other archeologists, reaching out to ask technical questions about lab work, or keeping up to date with “what’s new in western science we don’t know here in the village,” he says. Q̓íx̌itasu has named his independent business Central Coast Archeology (CCA), since that’s the region he works in, his ancestral homelands and waters. Recently he’s been learning how to fly a drone, accessing new technology to offer more expansive views of their lands, waters and ancestral markings.

He hopes he and others doing the work can inspire youth in the community. He often works with youth in land-based healing outings, bringing them to visit sites, sharing stories, songs, artifacts.

“They’re so used to seeing all these graduate students and outside people coming in and doing the work,” he says. “We’re doing it ourselves. It’s a great sense of accomplishment that we’re doing this where our ancestors were.”

Q̓íx̌itasu says they don’t publish their findings, and rarely share outside of the community. It’s work they do internally, he says, “almost like what we do in our potlatches, sharing our oral history.”

“If anybody wants to learn about rock art locations, interpretations and analysis, they don’t have to go to the arch branch or main library, they come to the source, the culture centre or the HIRMD office,” he says.

Q̓íx̌itasu says he never uses the word “decolonize,” but he’s been told that that’s what he’s doing.