Roger Harris has been a Nuxalk Guardian Watchman for about nine years. His role, he says, is to protect his lands and waters, to serve his community and to set a good example for the Guardians coming up behind him.

“My role is to teach the young people coming up, to show good leadership and move our Guardians forward,” Roger says as he drives himself and Carlos Edgar around Bella Coola doing compliance checks with sports fishers.

Compliance checks are one of the many tasks Nuxalk Guardians do in their job. They also monitor, conduct surveys, collect data, help with search and rescue, bring researchers out in their territory, and more. Roger says he grew up in a foster home most of his life and working as a Guardian has helped to bring back much of what he lost and what he’s trying to protect today.

“We’re often first on the scene. We started as researchers, but our role got bigger. We do training in rescue response, oil spill recovery,” Roger says. “It’s a good name, to be a Guardian. We’re like angels out there.”

Nuxalk Guardians work with other Guardian Watchmen as well, through training courses and any time support is needed. Recently, Nuxalk Guardians traveled to Heiltsuk territory to assist in search and rescue efforts. Their care for their neighbouring community was reciprocated in the way they were hosted, Roger says.

“The love and support we got when we got there, oh man, they really looked after us,” he says. “Every time we pulled up to the dock, we didn’t even have time to tie up, they were bringing us a tray of food.”

Roger says he’s gotten to know many regular sports fishers, campers or tourists who travel to beautiful Bella Coola during the summer months. Generally, people are happy to comply, they have come to recognize him and others. Every now and then, they deal with “the odd bad apple,” he says, but he’s not worried, as people will gradually understand and recognize Guardian authority over time.

“Generally, it’s pretty respectful. You run into the odd person who doesn’t like being asked to show their license or their gear, but that doesn’t bother me,” Roger says.

Guardians go through a variety of training, including “verbal judo” which teaches about effective communication, conflict resolution and de-escalation techniques. Roger says one of the biggest lessons he’s learned in his career is to not make situations escalate.

Carlos Edgar, one of the younger and newer Guardians, says he has learned a lot from Roger about how to get out of difficult and dangerous situations and keep the peace.

“Roger has extreme composure,” Carlos says, sharing a story about a time when Roger experienced racial harassment and kept his cool when “anyone else would have rightfully lost their mind.” To be able to know when and how to step away from conflict, without making it worse, is something Carlos says he deeply admires in Roger and other Nuxalk Guardians.

“It’s really a nurturing program,” Carlos says. “The experiences, the opportunities, the various tasks we do on the job… before this job, I never saw our territory.”

Carlos says one of the best parts of his job is having the opportunity to visit different important parts of his territory, opening his eyes to what his Nation is working to protect.

“It’s important to understand our territory, to see what’s happening out here. We’re all over the place, seeing a lot of things people aren’t seeing,” Carlos says. “Before this, I didn’t know, so I wouldn’t have cared. Now that I’m out here everyday, it’s made me understand not only the importance of protecting our territory, but conserving it all too, because it’s so valuable.” 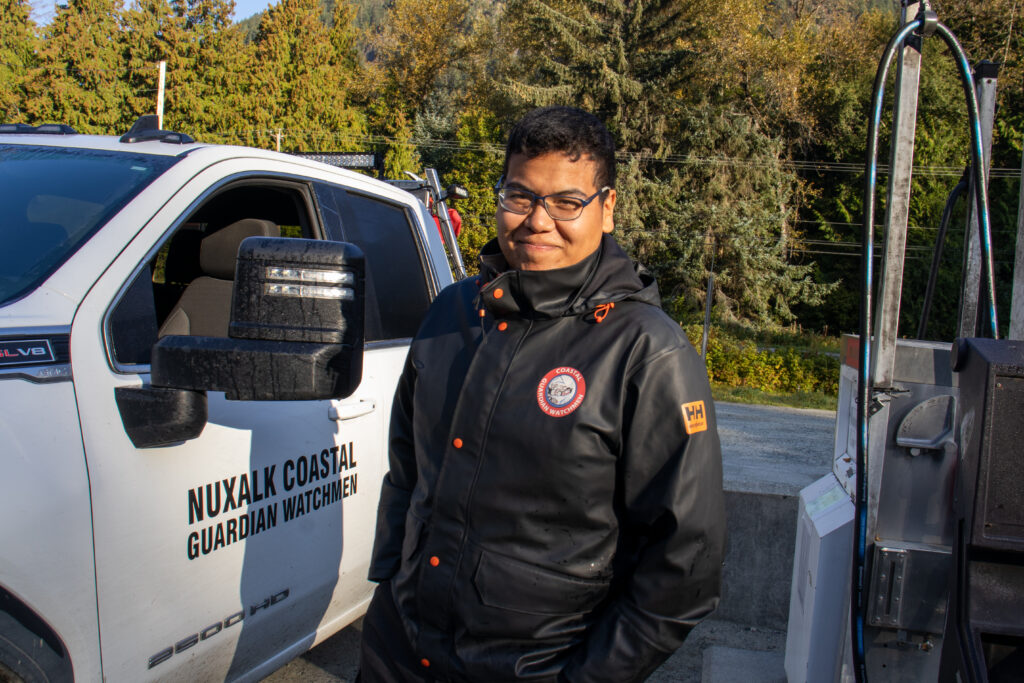 ‘Passing on knowledge from one generation to the next’

Charles Saunders has been working as a Guardian for seven years. He says he’s there to “observe, record and protect.”

“We’re the eyes and ears. We know what’s here. We have a lot more say now of what goes on in our territory,” he says. “My first two years working as a Guardian, I was telling my dad all the places we went and he laughed and said ‘all the places you’ve been took me 20 years to get to.’”

As Charles takes a group of salmon biologists out to Ats’aaxlh (South Bentick), where his dad’s side is originally from, he traverses the waters with ease. He grew up watching his grandfather, dad, uncles and cousins drive their boats, but learned more with the Watchmen.

“The majority of my boat training has come from the Nuxalk Guardians… John Sampson taught me to drive, how to operate boats,” he says. “The most important thing to remember is your spacing, how far you are from the shore, which direction is the safest path to take, especially when avoiding logs, to always look for exit routes, different paths, and the weather, keep in mind the changing weather and winds.”

On June 1, 2022, the Nuxalk Guardians joined the Kitasoo Xai’xais Guardians in signing a Memorandum of Understanding (MOU) with BC Parks to run a pilot project that ensures  the Guardians have Park Ranger authority.

“We’re always out, we’re always interacting with the public — sports fishers, tourists during bear watching season — but in the last 10-12 years, we’ve had a few instances where we’ve needed some kind of authority for illegal activity,” Ernie said. “For years we didn’t have conservation officers, DFO rarely out in the field, not nearly as much as we are… we’re out monitoring our cultural sites, village sites, passing on knowledge from one generation to the next.”

Roger will be one of the first Nuxalk Guardians to officially have Park Ranger authority. He says the MOU won’t change his role as a Guardian, but will grant them the power to enforce, rather than simply monitor and wait for someone else to come in and take action.