Iljulaawas Barbara (Babs) Stevens is from the Ts’aahl/Kay’ahl Laanas clan. She recently retired from working over 50 years for the Skidegate Band Council, a job she says wouldn’t be possible without a commitment to healing.

Her first job was ironing for Berta Brown at Brown’s store in Skidegate when she was 13 years old. Back then, she made 35 cents an hour, she says, settling in with a cup of coffee in her home in August.

“Then I worked at Marg’s cafe, I worked as a janitor at the hospital, then in the pharmacy. I worked at Kendall’s who ran a water taxi and booked airline tickets,” Babs says. “I got married in 1966 and my husband and I had a baby girl, Natalie in 1970, and that’s the only time I didn’t work in my life.”

After two years being a full-time mom, Babs applied for a job at the Skidegate Band Council as a secretary. She got the job, working just a few hours a day at the time in a tiny office at the community hall, before they moved to the Longhouse and then the newer building.

“When I started working there, I never thought ‘this is going to be the job for the rest of my life.’ I started in February 1972 and I was there for 50 years and five months,” Babs says.

“I just kept working and then I started a healing path in 1976 and the healing path, being centreed with myself, is what kept me going for so many years.” 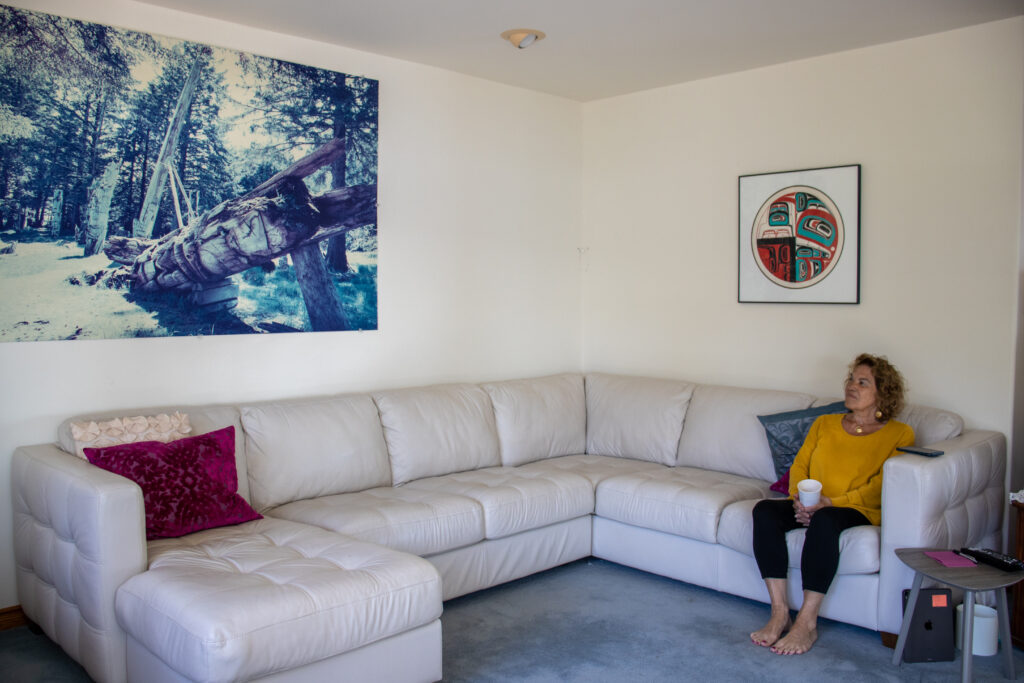 “I never ever really thought, as I worked through all the different jobs for the band council that ‘I’m gonna work till this, or I’m gonna carry on till that,’ I just worked,” she says.

Looking back, Babs says there were many highlight moments in her time working for the community. “When Bill Reid carved the totem pole and we opened the new Haida Longhouse office building,” she recalls. “Another highlight was bringing the Lootaas home from Vancouver, having all the young people and adults paddle it up here, paddle it home… there was such a homecoming for it. There was a big feast.”

At the feast, it was announced that South Moresby would no longer be logged, she adds, remembering going down to Lyell Island and standing on the line.

“There’s so much that guides you. Ravens would come and let us know when the RCMP were on their way, you know, so many things that are beyond, beyond our minds,” she says. “I’m sure every community like ours has those things — the connection to the beyond, to the Supernatural.”

During her time with the Skidegate Band Council, Babs feels grateful to have witnessed and participated in a big “shift in energy efficiency” for her community.

“Energy, that’s my passion. When we did the energy project at the Ḵay Centre, we’re still working on perfecting it, but that was such a proud moment for all of us,” she remembers. “Then the heat pumps in every home in Skidegate. We solared up the rec hall, the youth centre.”

Right now, the Skidegate Band is working on building a 24-unit project for Elders and families right next to the new health center up behind the band office and “SBC has been approved through NRT Community Energy and Diesel Reduction Program to install heat pumps and solar panels to the units,” Babs says.

There are so many more highlights, she says, but like any job, there were challenges too. She says she tells other band administrators all the time, about the importance of healing.

“Band administrators are important for councils and employers have a hard time keeping them.”

Babs says she has known her friend GwaaG̱anad Diane Brown since they were four years old. GwaaG̱anad was working as the head of the health centre for many years, and she ended up convincing Babs to do a healing workshop.

“I never looked back. I’ve done a lot of different kinds of healing since then,” Babs says. “It’s important for human beings, no matter where they are in the world, to work on what it is that needs to be healed.” 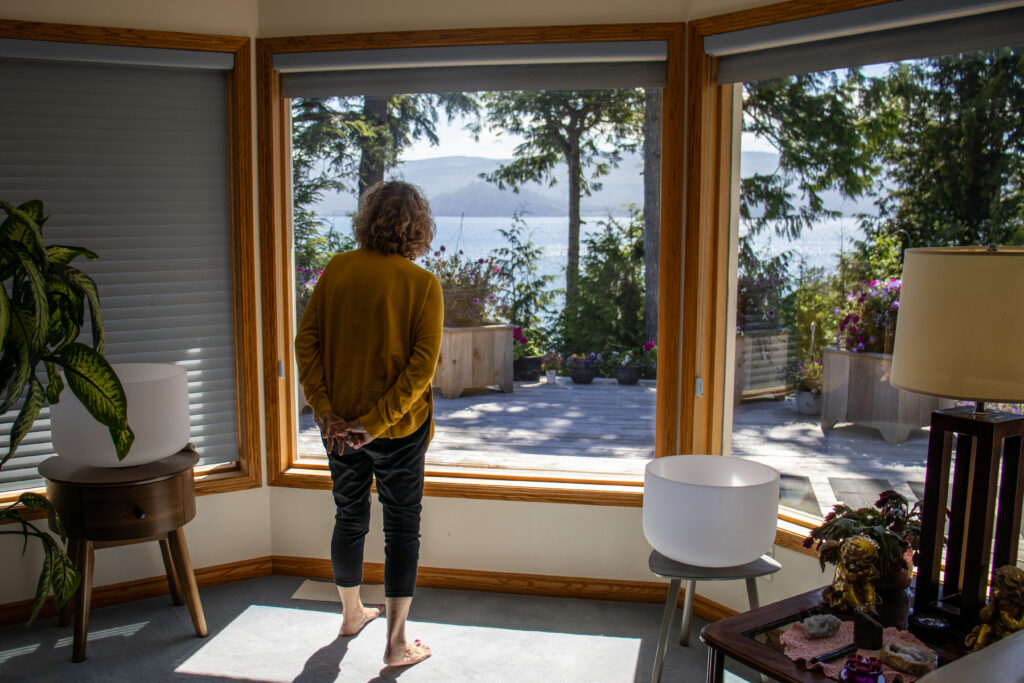 ‘We’re the ones that create our lives and our world’

Even when Babs was a little girl, she says she always knew that peace was her path.

“To me, healing is bringing yourself to a place of peace with everything,” she says. When she was five years old, her brother went missing, and she carried that with her for all those years.

Babs says she does the work in pieces — she goes deeper and deeper into it — until she comes to terms with it and finds peace.

“I don’t know how to explain it… you work on things, you have ‘aha’ moments where you don’t even realize that holding onto things that happen to you, holding tight to them and never letting them go, maybe holding a grudge against somebody, that the only one you’re hurting is yourself,” Babs says.

“We’re the ones that create our lives and our world.”

The world is waiting for us to “wake up,” Babs says, “to be who we’re really meant to be, to be our true selves and to be the best we can be, do the best for humanity that we can be.”

She’s taken many courses and workshops, the one that she has been with since 1990 is ‘Psychology of Vision,’ (POV) led by teachers Lency and Chuck Spezzano who are dedicated to healing work, she says. She remembers being “well on her way” to healing and realizing after 100 days of work with POV, she felt “the way was well cleared for my grandchildren to come into the world.”

“I remember my husband would look at me and say, ‘you’re doing such a good job, don’t ever stop doing what you’re doing because I see how it’s affecting our family,’” Babs says, a message repeated again to her from her sister’s late husband Chief Chee Xial.

Babs says no one can be forced to heal.

“Everybody has to make their own decision about healing. I simply show them by how I’ve healed… by example. You can’t force anybody to heal, that’s the last thing you can do.”

Babs works with Francine Girard, Emily Chu and Bernadette Demens, conducting POV workshops in the winter months, one day a month. “We get people from China, Japan, Singapore, Skidegate, Vancouver, whoever wants to come, comes,” she says.

A lot of powerful healing has happened with her friends, community, on her home lands and waters — in the presence of her ancestors.

“My best friend Diane, her daughter and our friend would go on an annual retreat to hot springs every year,” she says. “We’d gather food, have healing ceremonies… the Supernaturals are really available down there.”

“I remember one day we were spearing for abalone — them days it was ok to get abalone — we were spearing for abalone, and the stick was all wrecked… we were thinking ‘what are we gonna do tomorrow?’ “In the middle of the night, I woke up and could hear this pounding, and I never thought anything of it. I went back to sleep. When I got up the next morning, the stick was fixed. It was ready to go.”

Babs says she wouldn’t have lasted 50 years if she wasn’t on a healing path.

She reminds band admin to “always keep in touch with their funding officer who will have all the answers you need,” and that “your FSO is your ally, they’ll guide you when you need guidance, information and healing, being as centered as you can be.” Babs says she was lucky to have David Seymour, one of her “biggest allies,” who was always available to her when she needed information or had questions.

But each person’s healing journey will look different, she says. It helps to have an open heart and mind.

“Everybody’s different. The things we have to heal are all so different. But the main thing is to work on them.”