Mercedes Robinson has grown up sharing her home territory of the Kitasoo/Xai’xais Nation with the grizzlies, black bears and white Spirit bears of the Central Coast.

At the age of 18, the University of Victoria student has already worked as a tour guide for the world-renowned Spirit Bear Lodge, interned with the Spirit Bear Research Foundation and participated in a Great Bear Rainforest IMAX movie viewed by audiences around the world.

“I think bears have taught me that it’s important to protect the land and territory we live in,” says Robinson. “Bears depend on the salmon and so do we. It’s important to understand that our actions affect everything around us and that if we don’t realize this, things could go in a bad direction.”

Robinson manages data and motion sensor cameras for a new study by the Kitasoo/Xai’xais Stewardship Authority to examine the impacts on bears of reduced ecotourism during the COVID-19 lockdown. Stewardship director Doug Neasloss considers her a “rising star” who knows more about bear cams than anyone else in the community.

“Mercedes has probably had more field work experience in her lifetime than someone who’s emerged from an undergrad program,” says biologist Christina Service, Science Coordinator for the Nation. In this year’s project, she says Robinson “has risen to a really dramatic leadership role. And she’s knocking it out of the park.”

The first-year social sciences student was disappointed when the virus outbreak cancelled classes early, but she’s excited to be working with bears again. Robinson is preparing cameras that will capture bear activity along “stomp trails” – bear paths that usually lead to a rub tree. “They leave their scent on the trail and that’s their way of communicating with each other,” she explains.

“One bear might use a stomp trail to arrive at a rub tree then go catch a fish. A bear will come along later and know that another bear was there. They don’t like interacting with each other so it’s a good way to communicate with ‘social distancing’,” she laughs.

It’s a practice that has made her reflect on bear behaviour. “Bears may not associate with one another but they still acknowledge one another and work as a unit,” she points out. “They fertilize the soil, plant seeds when they dig for roots, and disperse the salmon that carry nutrients that make the trees so much stronger.”

Robinson attributes her passion for stewardship to both her family and the Supporting Emerging Aboriginal Stewards (SEAS) program at the Kitasoo Community School, where at the age of 12, she began learning about rock paintings, went clam-digging and fishing, and harvested traditional foods.

Robinson has two traditional names: Halulu meaning “butterfly” and Abuks Clamalyu, meaning “mother, the one who holds the family together.” Her mother, Chief Roxanne Robinson, is a former language teacher who now leads the Kitasoo/Xai’xais Nation. “My mom always wanted us to learn about our culture and eat traditional foods, and my dad would harvest them,” she says.

Robinson is also passionate about encouraging young people to find their path. “I think something they should know is to stay strong and to do what they love – no matter what other people tell them. Continue to educate yourself about the outside world and how far you can go in life.”

She hopes members of her generation will bring this knowledge back home so they can continue to thrive in their communities. 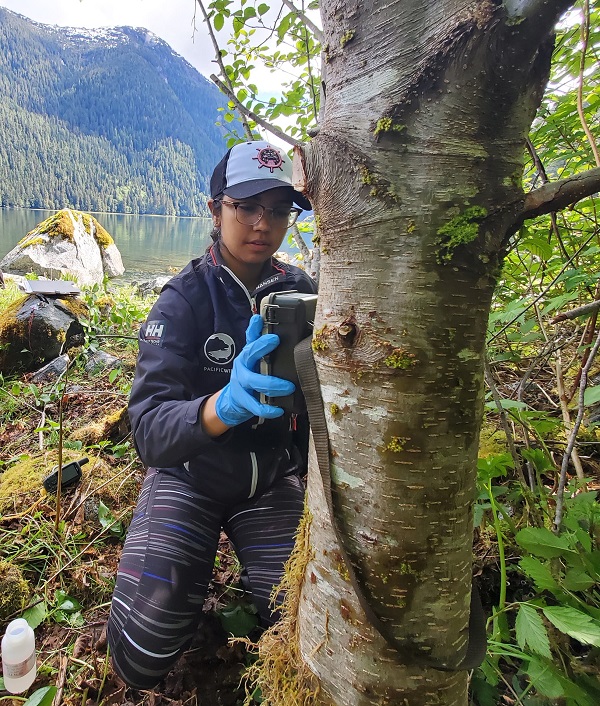