A new outreach booklet by the Metlakatla Nation offers a step-by-step guide for First Nations that want to measure the full impact of development on their communities through Cumulative Effects Management (CEM).

In 2014, northwest British Columbia was awash in LNG referrals and proposals. The Metlakatla First Nation responded through its Governing Council by establishing a cumulative effects management program. The Council directed the Metlakatla Stewardship Society (MSS) to undertake an Indigenous-informed approach to the work.

MSS Executive Director Ross Wilson says leadership wanted to understand the full extent of oil and gas industry benefits and impacts to the community, rather than examining them one by one.

“We weren’t talking about one pipeline and one facility, there were numerous pipelines and facility referrals submitted,” explains Wilson. “It was leadership’s directive that established the CEM initiative.”

There was limited cumulative effects work being done on the North Coast at the time and few examples of implementing CEM in an Indigenous context.

With funding from project proponents and MITACS, Metlakatla and Simon Fraser University’s School of Resource and Environmental Management partnered to establish an “Indigenous Cumulative Effects” approach.

“As a department, we wanted to know what the community values were. How those values might be impacted by industrial activities. And how could we monitor those impacts and provide management approaches,” Wilson explains.

In a first step, a series of community workshops narrowed down a list of priority values to 10, with an intent to focus on three pilot values: Food, Social and Ceremonial (FSC) activities; Butter Clams; and Housing.

The stewardship office soon realized it lacked up-to-date community data about all three pilot values. The Metlakatla Community Census was launched as a next step to gather information from all members over the age of 15 who lived in the territory.

“We decided to call it a census because we wanted to reflect the importance of what a census is. We wanted everybody to answer it. And we wanted it to continue in perpetuity,” explains Anna Usborne, who works with Metlakatla Strategic Stewardship Initiatives. 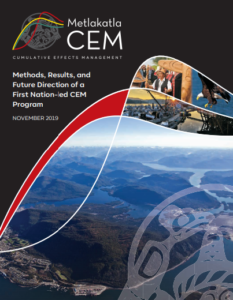 “This now gives Metlakatla the data to take to companies to ask what their mitigation would be,” she adds. “If you’re a business that wants to do business here and you’re proposing to bring in 5,000 additional employees to the community, then you may need to do something to ease the housing pressure in Prince Rupert.”

Finding ways to link CEM to decision-making can be a challenge. The Metlakatla CEM program, Wilson says, “helped the Nation gain valuable insight into our planning strategy as we engage with industry and government.”