Renowned Haida artist and carver Kihlyaahda Christian White and his wife Candace Weir-White, their family and clan raised a pole in front of their Longhouse in Old Masset — conducting business, sharing culture and celebrating with hundreds of people for two days.

“This potlatch is to honour the children, the living Haida, to give them Haida names and make them proud of our culture,” says Christian standing in front of the pole as it receives final touches days before being raised.

“I believe we’re doing what we’re meant to be doing. Carving totem poles, having them raised, celebrating, reviving our culture, carrying on our traditions and enhancing them in this ceremonial way.” 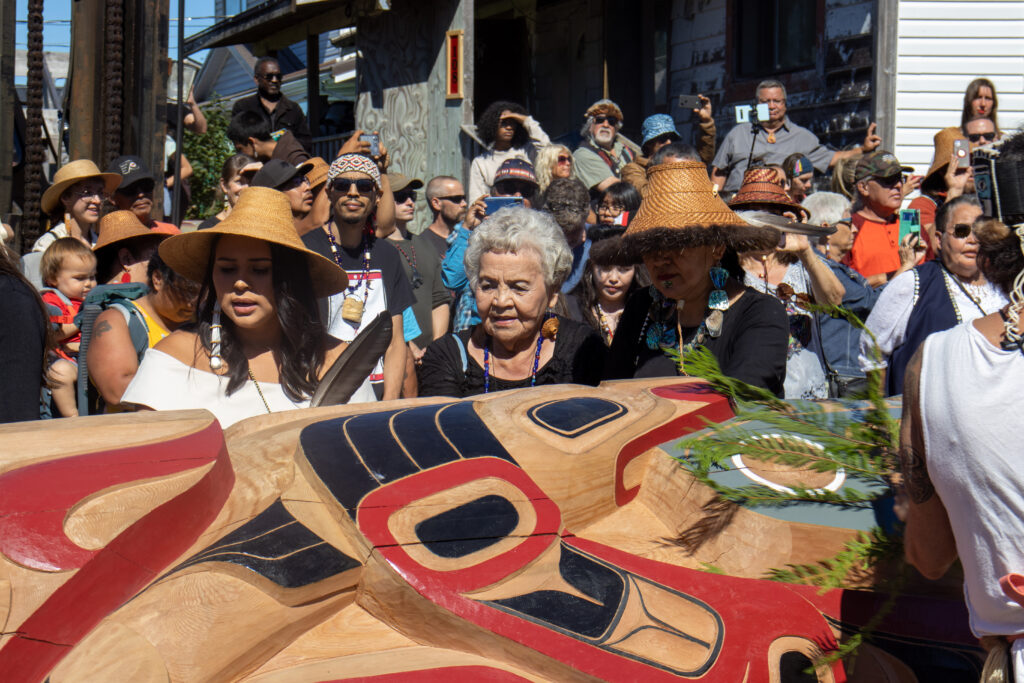 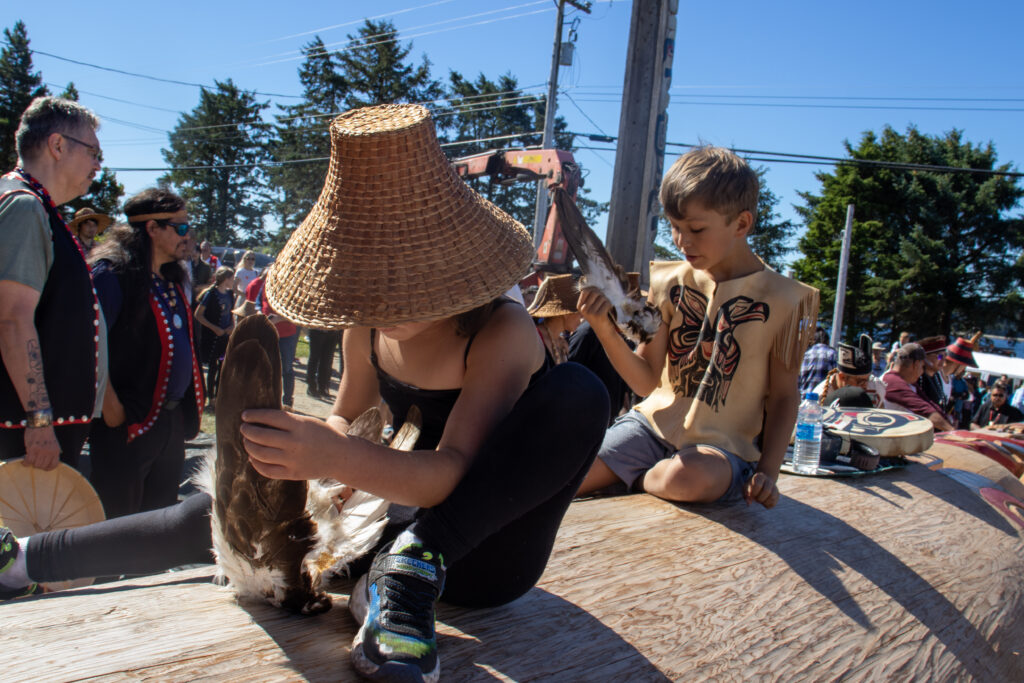 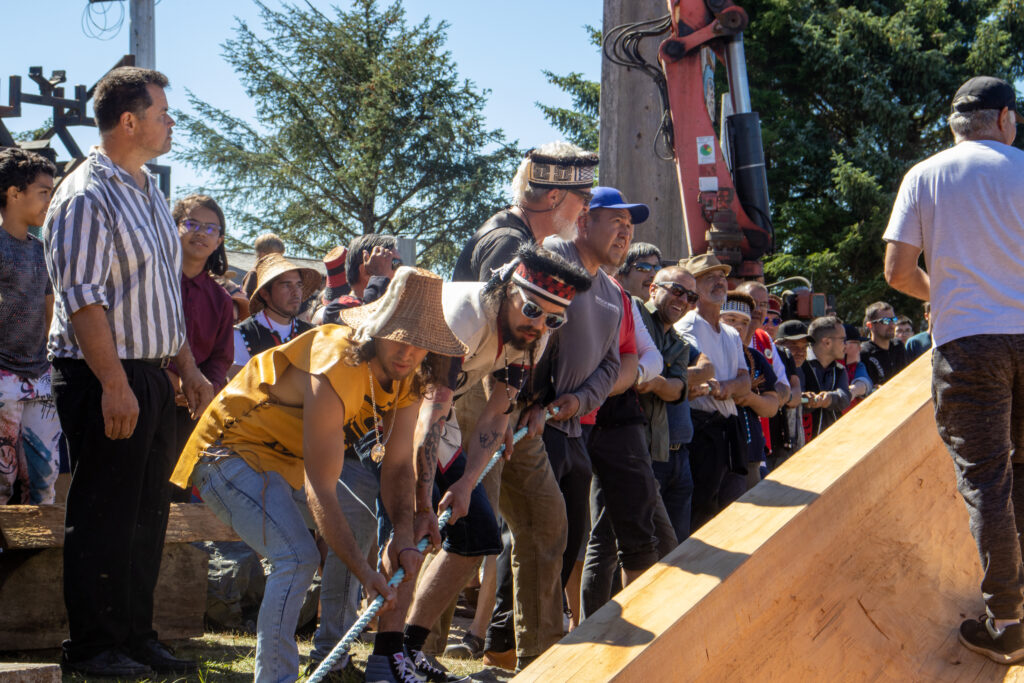 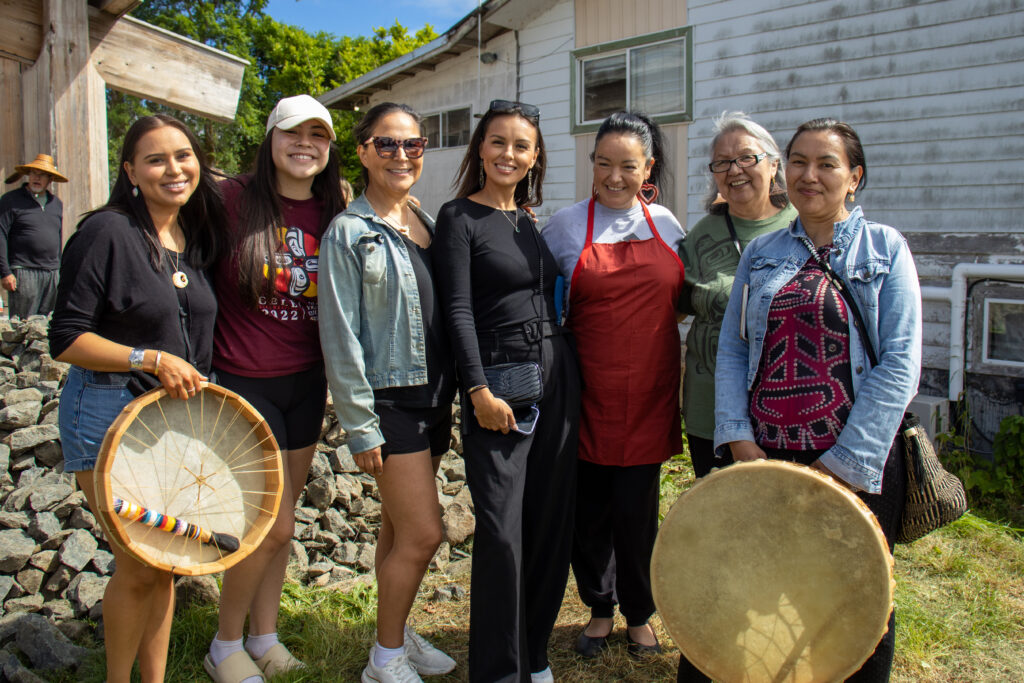 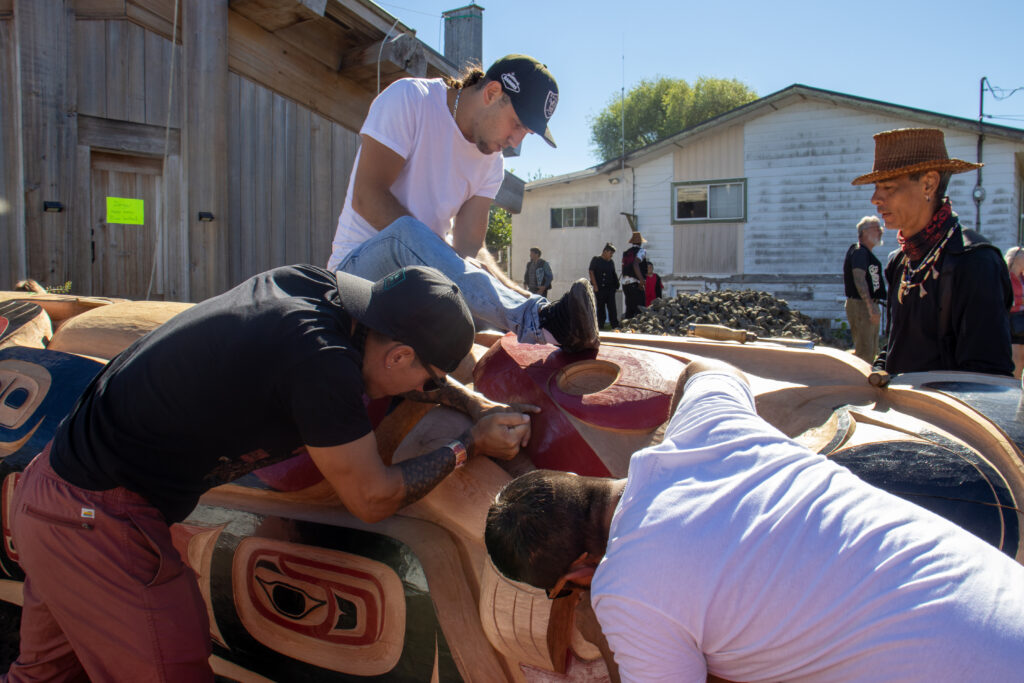 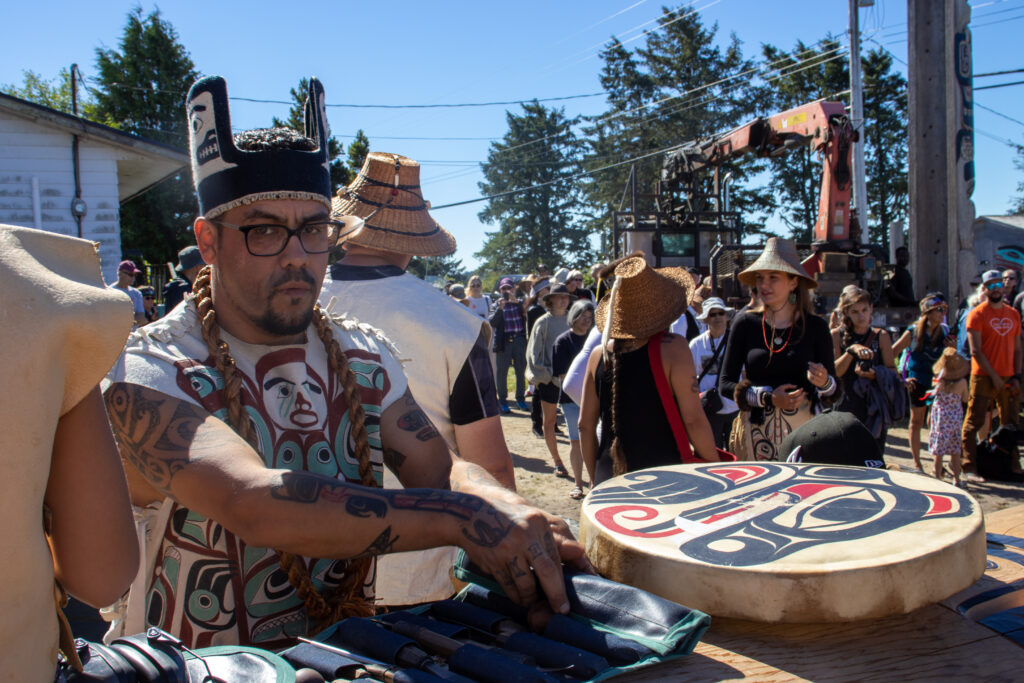 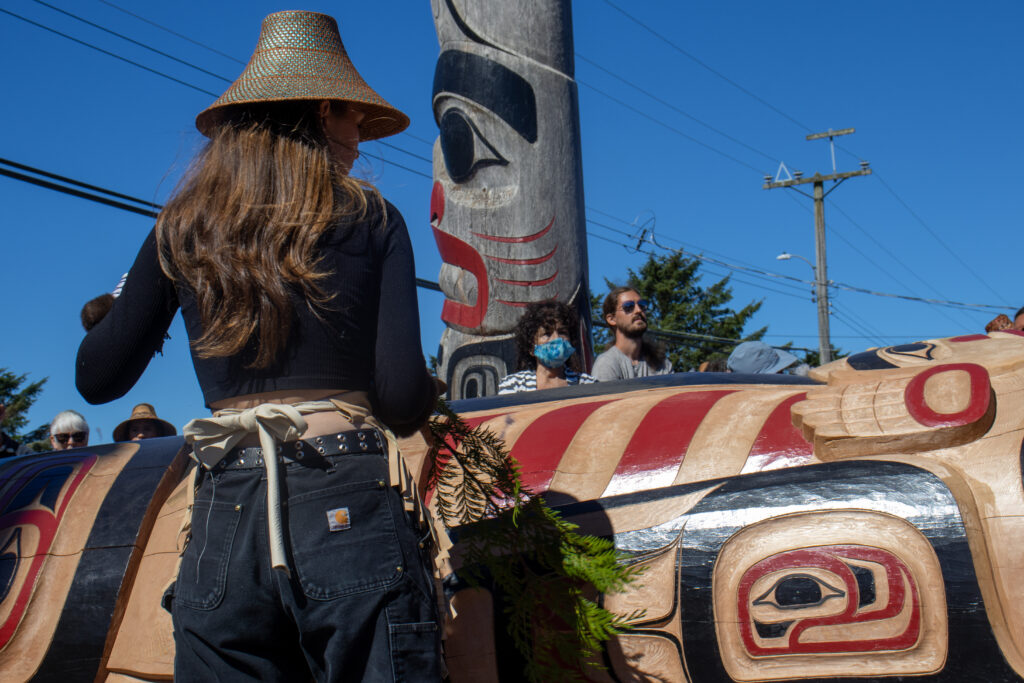 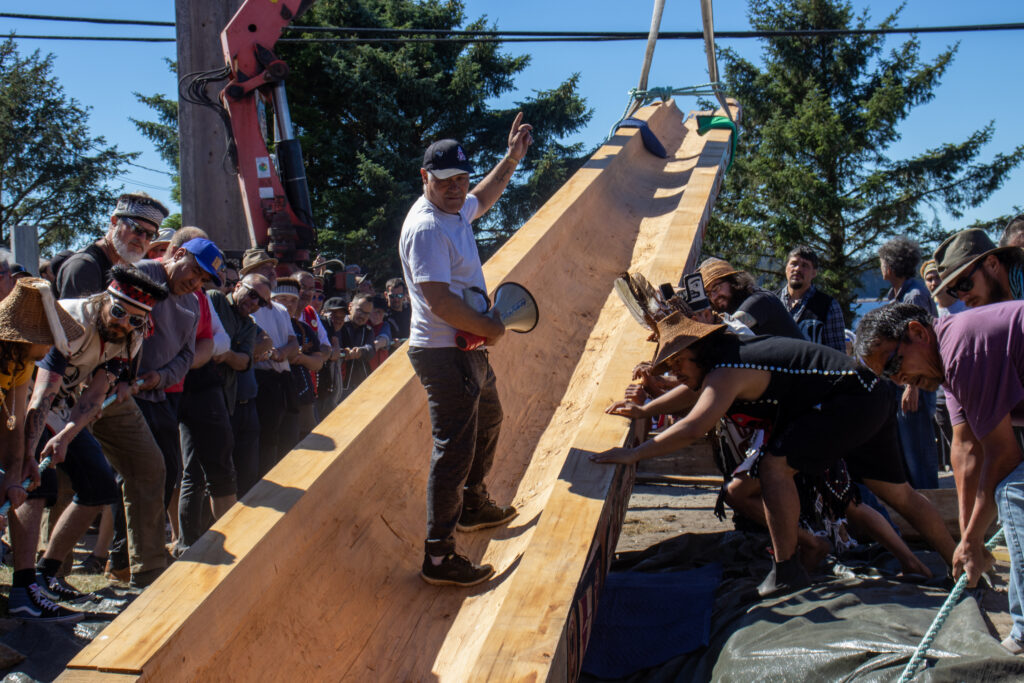 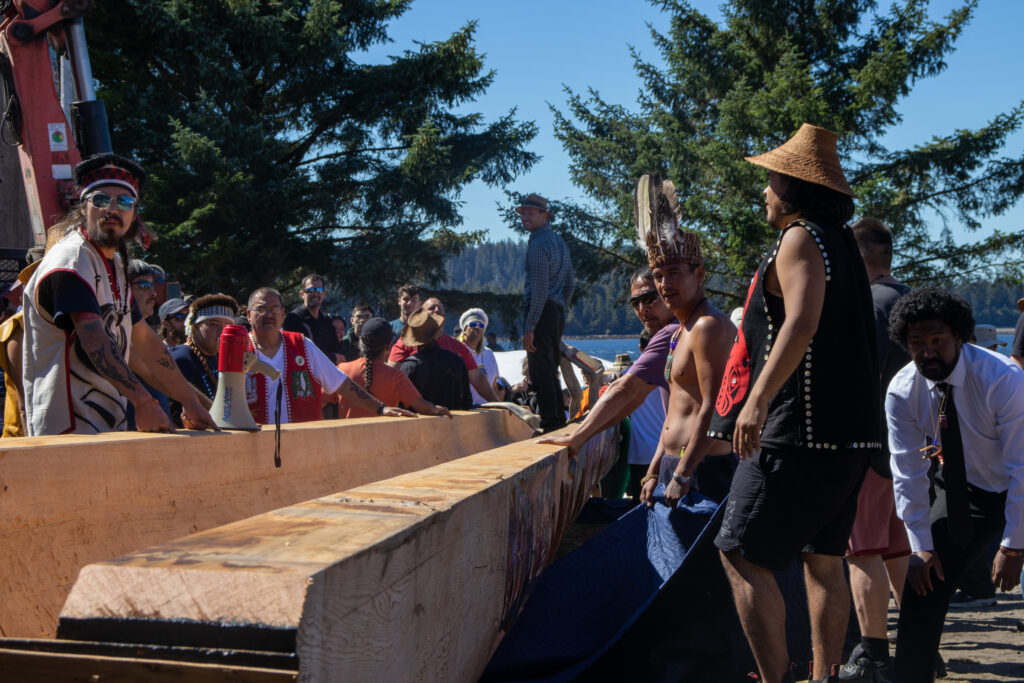 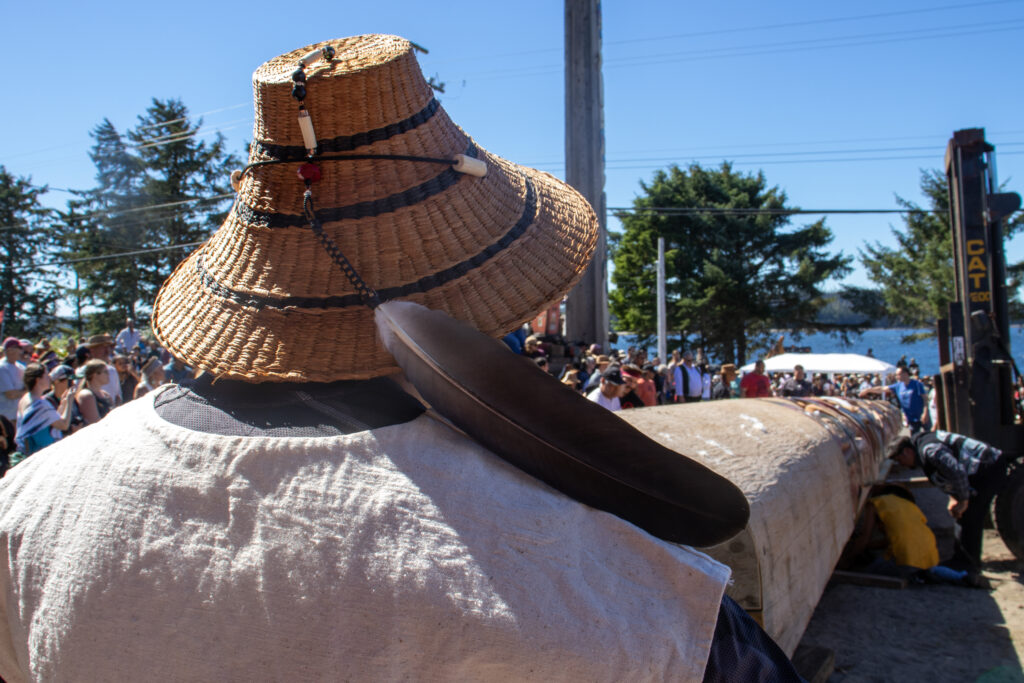 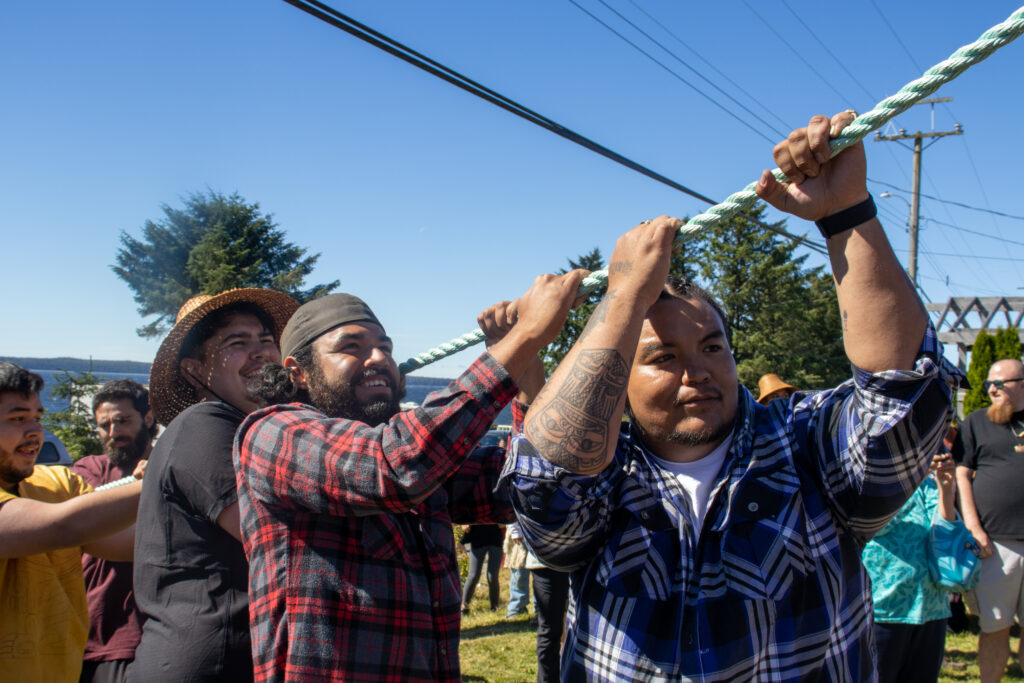 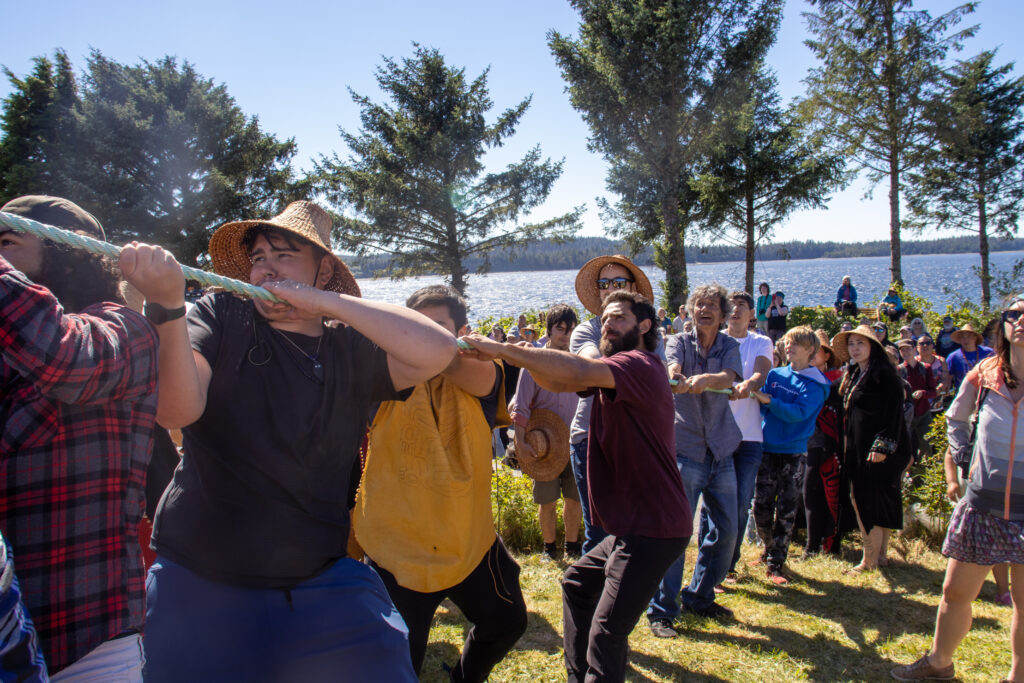 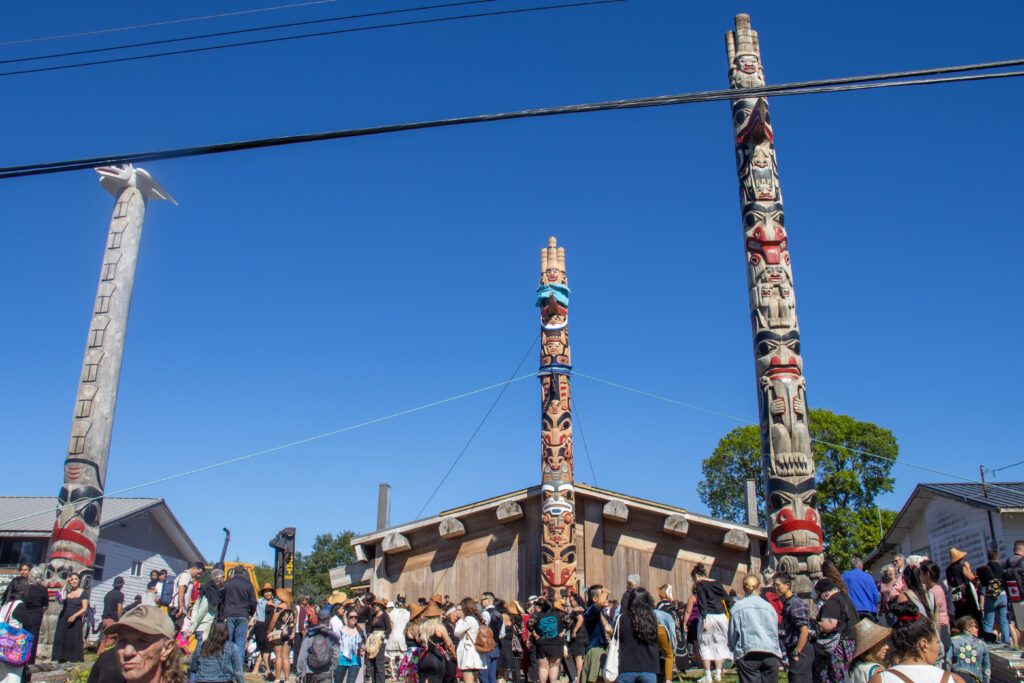 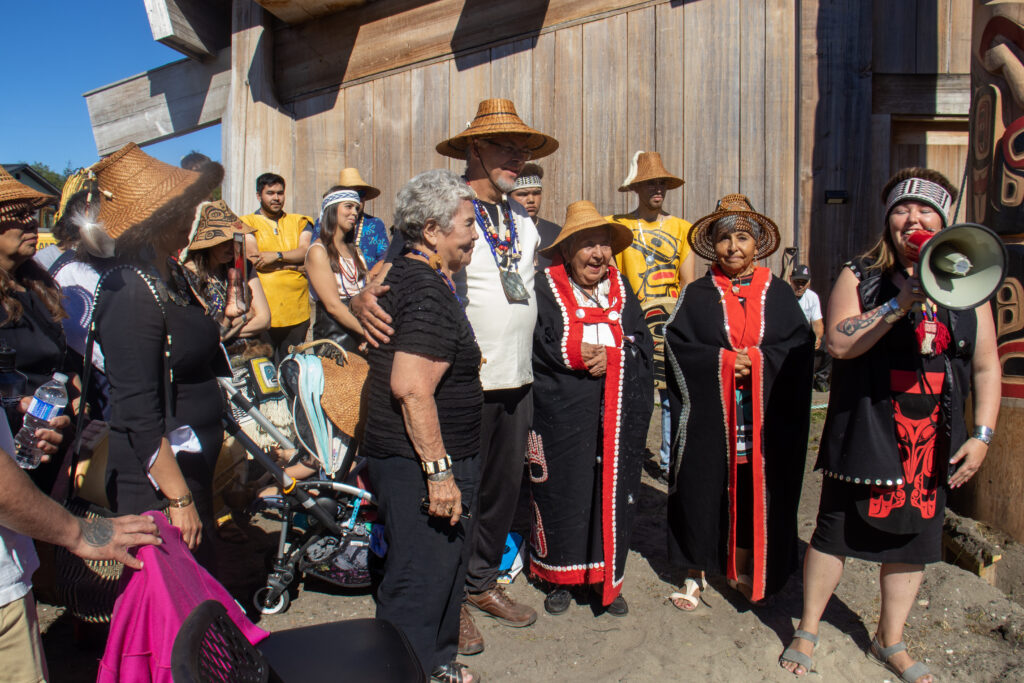 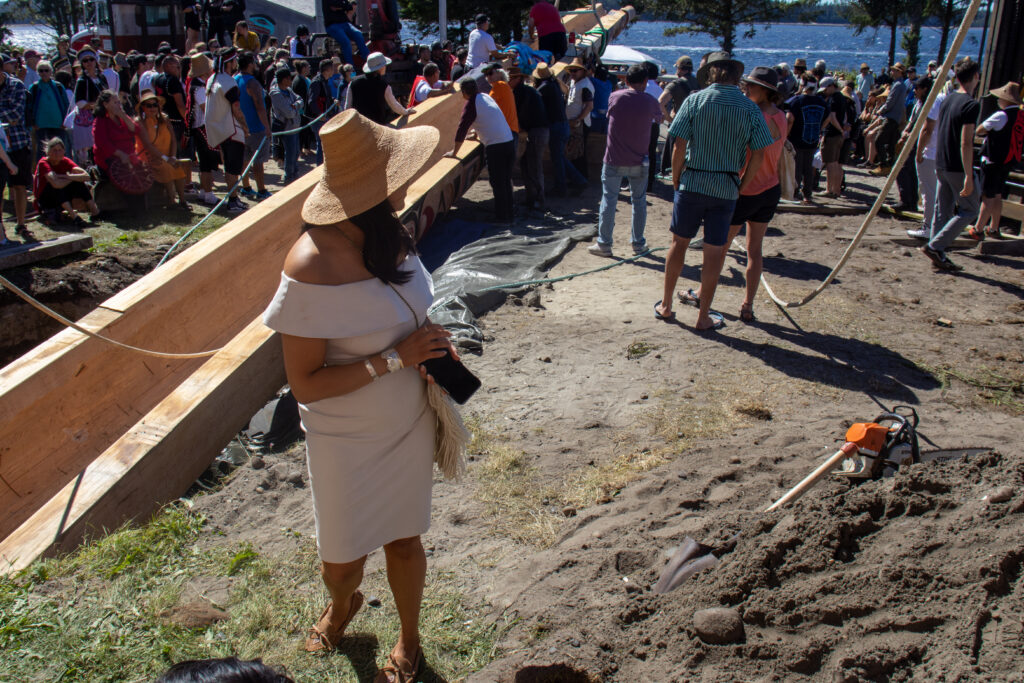 Christian first came up with the idea of carving and raising a frontal pole in front of their Tlúu X̱aadaa Naay Longhouse about eight years ago, he says, when he first got the 800 year-old red cedar tree.

The pole is the biggest the family has carved to date, standing at 53 feet tall by 5 feet wide at the base. It was carved over a 14-month period with Christian, brothers Todd and Derek White as head carvers and their niece and nephews as support. In the final days before the raising, visiting carvers took out their tools and added their touches to the pole while volunteers offered hands to help paint multiple coats that will last through the years.

Figures of the pole

The base figure of the pole, which is 5 feet wide by 14 feet tall, is a grizzly bear, one of the clan’s main sub crests. The bear is consuming a frog, and the tail represents “the spirits of some of our lost people,” explains carver Todd White.

“Within the arms and legs you see the salmon trout heads that frequent many of our totem poles,” Todd says. “The next figure is a great white shark mother who captured a woman. That woman became a shark woman. Her headdress represents the tail of the shark. She has female shaman ceremonial rattles.”

Each figure corresponds with a story, Todd explains, and each character melds in within the next.

“The sea lion itself is being consumed by a legendary figure known to inhabit K’iis Gwaii, what’s frequently known as ‘Langara Island.’ He had a home bear. A sea bear is a combination of a whale and a bear. You can see arms that look like a bear’s, with paws, but he also has a fin,” Todd explains.

“You see the pectoral fins of another of our crests, a two-finned killer whale,” Todd says. “Tucked in the sides of the belly of the killer whale are frogs — we put frogs on every pole we carve. Nan’s face represents the body of the tail and his headdress represents upturned tail feathers. On the side of his head you see the talons of the ravens and the wings come down the sides.”

Below the beak of the raven is another crest figure, berry picker and the moon, represented by a woman peeking over the crescent moon. The next figure is the raven, the clan — the beak added on mortesintenin, as are the fins. Peeking from the ears of the raven are the legs of the side watchmen.

“Me and my brothers carved one each of these watchmen. The watchmen are the guardians, they represent our ancestors who are continuing to guard our homelands, and they will continue to do so for as long as this pole stands. Our ancestors, our namesakes are represented on this pole.”

There were many hours Todd spent carving by himself, he explains, while his brother Christian was busy preparing for the potlatch, working on new masks that were danced for the first time during the potlatch, new songs, new regalia, preparing names.

In the days leading up to the raising and celebrations, Chief 7idansuu James Hart raised a house front in Old Masset, in a great show of support from one clan to another, the Staastas clan supporting the Yahgu’Laanaas clan. 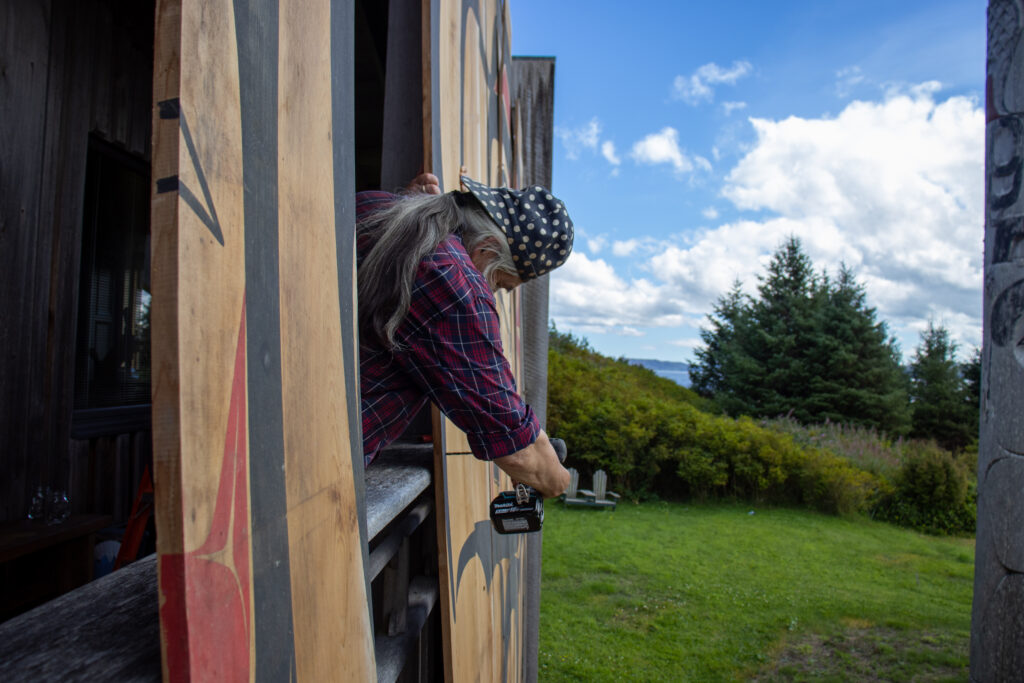 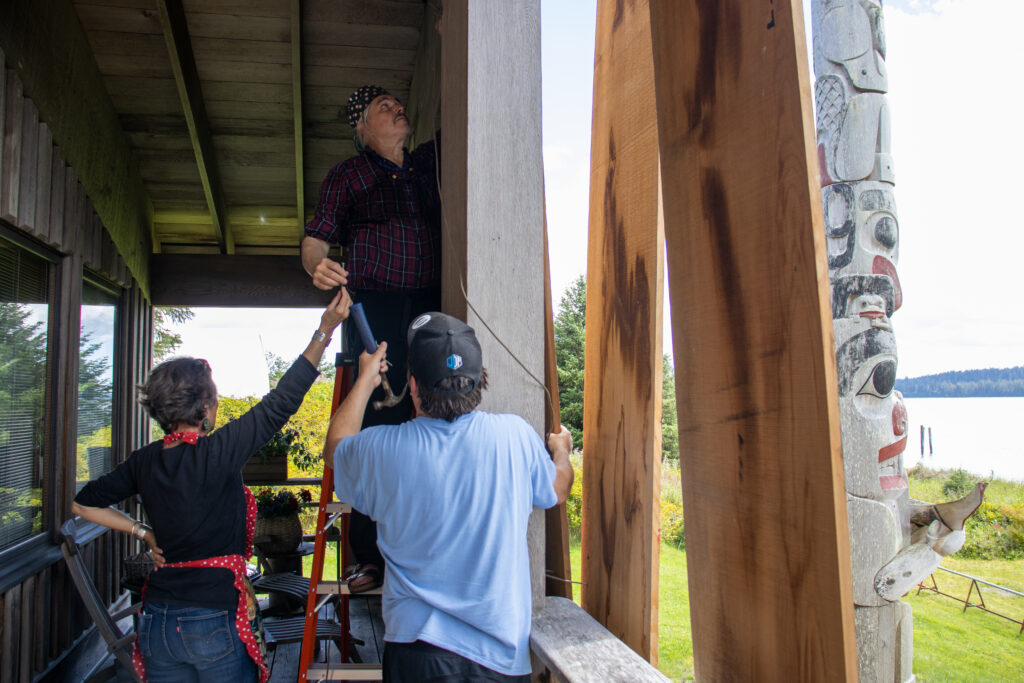 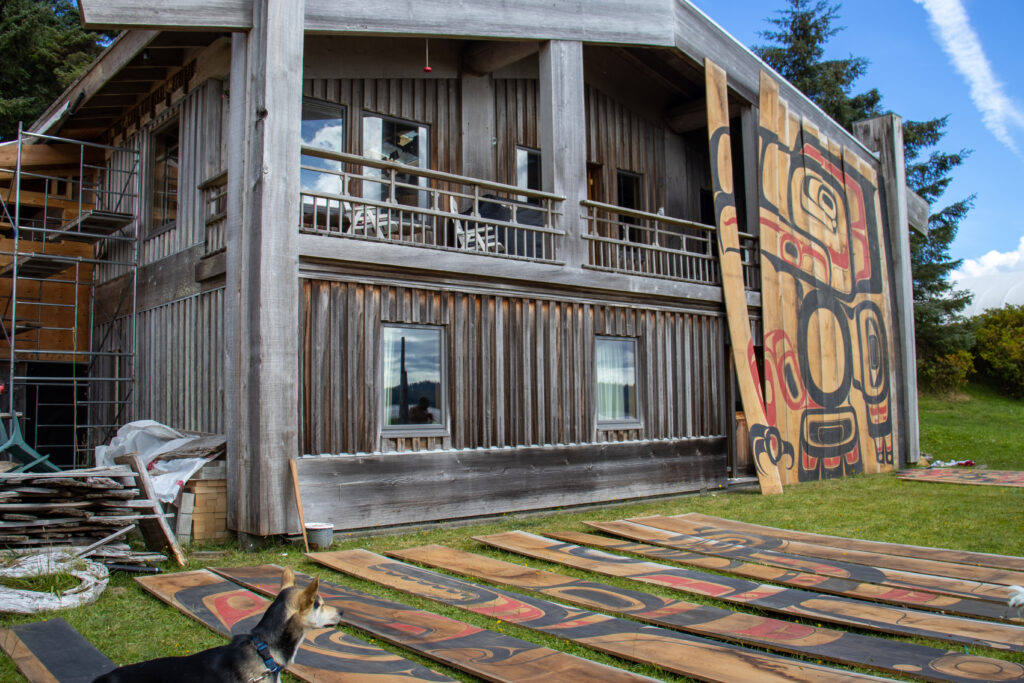 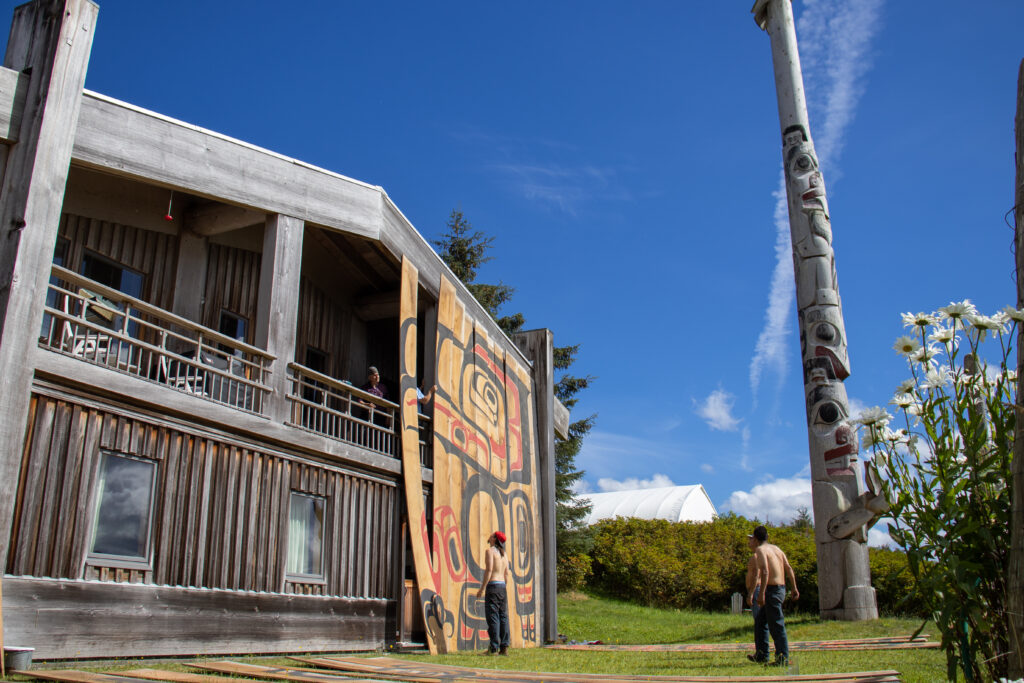 Potlatch ‘for the people’

After many hours under the hot sun, with the help of many of the community’s hands and heavy equipment, the pole was raised, as onlookers screamed and cheered in support. Hours later, the hundreds of guests gathered at the Old Masset community hall for the first night of cultural celebrations, led by the Yahgu’Laanaas clan.

Dinner was served and new masks were worn and danced, people heading home after midnight. Candace Weir-White, who has been working tirelessly for months in preparation for the feast, made it known that the potlatch was “for the people,” a message repeated throughout the weekend.

The next day, guests gathered again in the community hall as visiting groups had their chance to sing, dance and share, and people witnessed the work done by Christian’s clan and other clans, to name their family members, and uplift all those who were a part of making the event possible.

A large Haíɫzaqv delegation traveled north from their home in Waglisla, Bella Bella, bringing their leadership from their hereditary council, representatives from their elected council, their women’s council and their youth cultural group.

“It’s an honour to be here to uphold the treaty that was initiated by the chiefs of old, between the Haida Nation and the Heiltsuk,” says hereditary chief λáλíyasila Frank Brown. “What an honour to witness the business that has transpired, the raising of that pole, the business so far on the floor, taking care of your loved ones in a good way, to make sure they have a name, to enact our own laws.”

A treaty, of peace, respect and responsibility, was signed by the two Nations in 2014 in Haida Gwaii, finalized in 2015 in Bella Bella. The treaty has been uplifted on various occasions in the years since.

“We come with love in our hearts, respect, and admiration for the work you’re doing,” says λáλíyasila. “We heard the invitation and we have responded, because we’re renewing the alliance that was established for us in past generations. We need each other.”

Chief Gidansda Giindajin Haawasti Guujaaw echoes the other chiefs in celebrating the work done by Christian and his family and clan.

“When we look at that pole for the next 100 years, we’ll think of these moments inside here and the feeling we had,” says Gidansda.

Many hands went into making the potlatch run smoothly. People were helping carve and paint paddles and masks, make regalia, researching and speaking with Tribal Elders for names for months. Candace and Christian organized food, accommodations, travel arrangements and more, for hundreds of people. Haida relatives traveled from far and wide, including a group from Alaska, to witness the business that took place and celebrate with their kin.

It was a potlatch “for the people,” work to honour “the living Haida,” a historic moment that will be spoken about and remembered and spoken about for many years to come. During the potlatch, Christian White received the name ‘Kihlyaahda’ meaning ‘voice of the truth/true voice’ while many family members from both the Yahgu’Laanaas and the Staastas clan walked away with new names, songs, memories to last a lifetime. 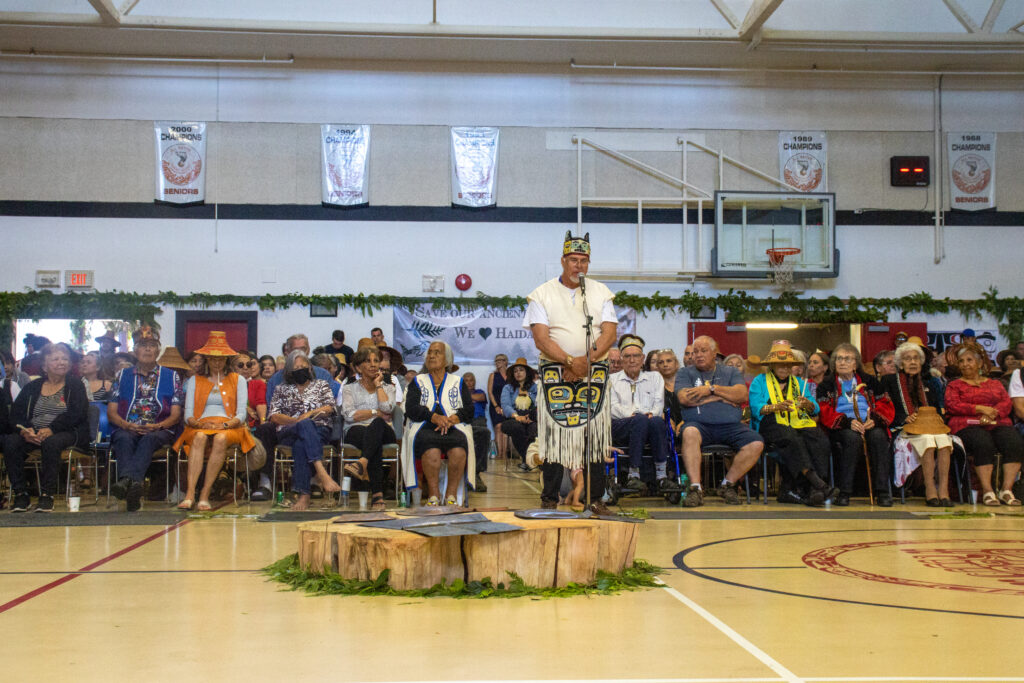 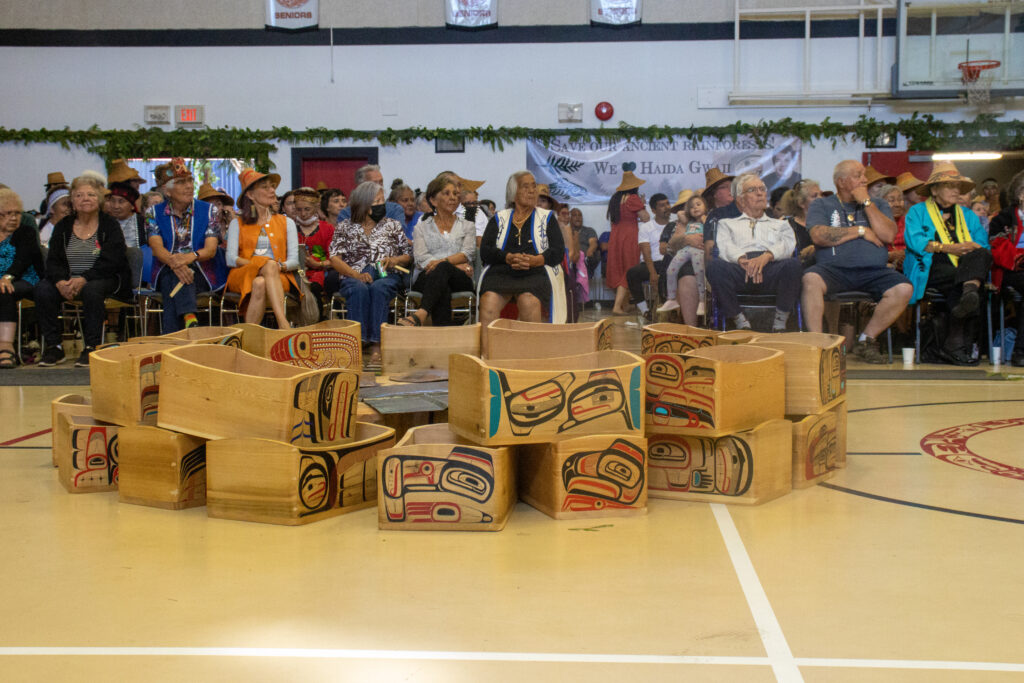 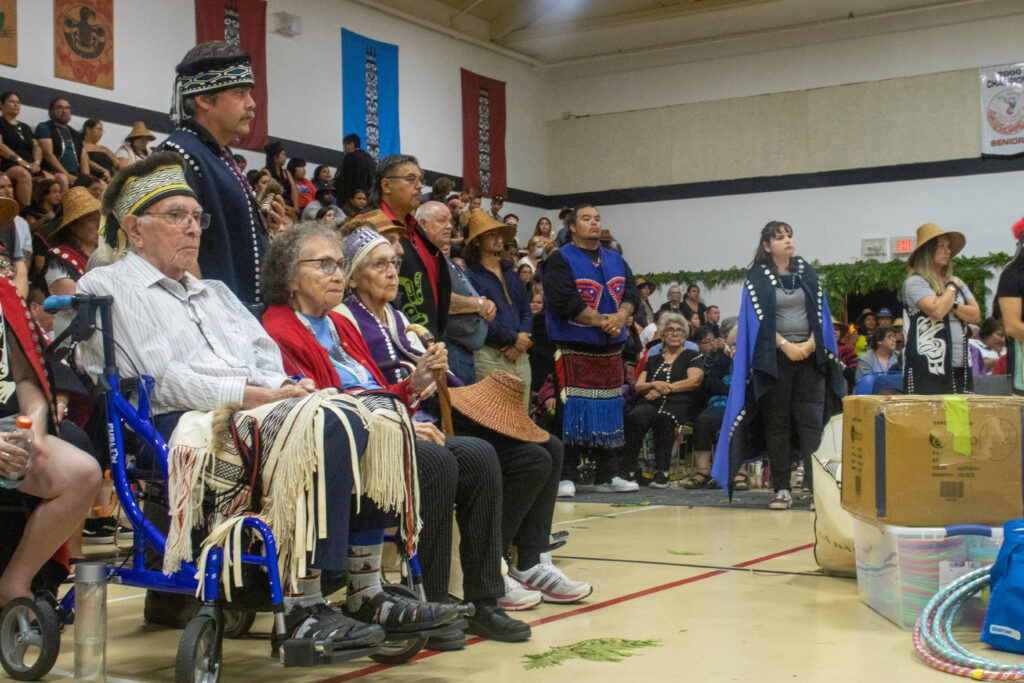 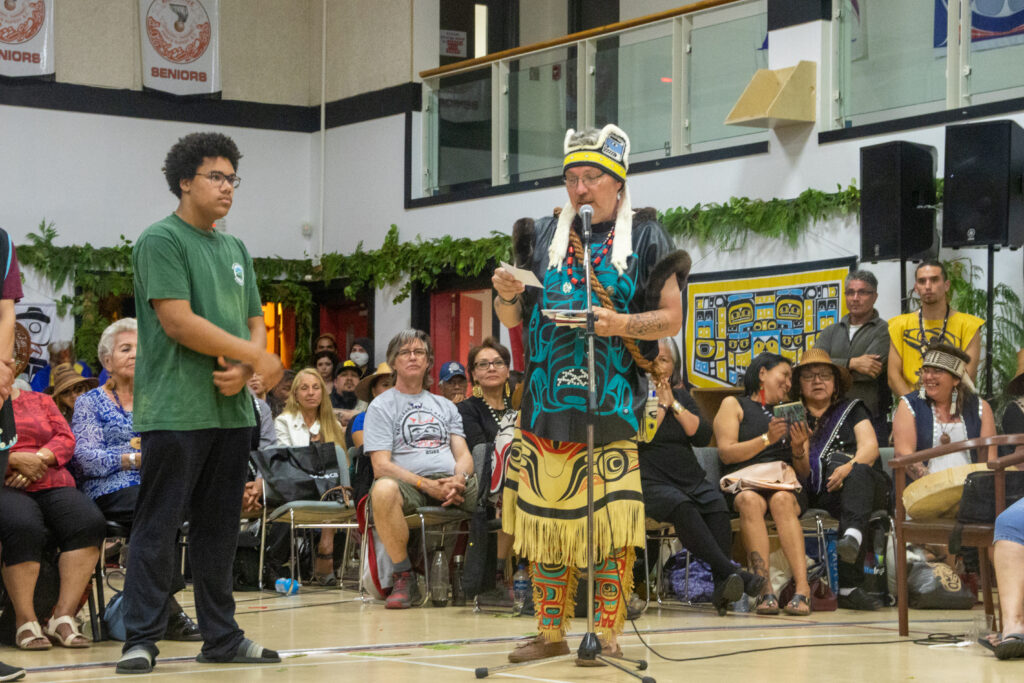 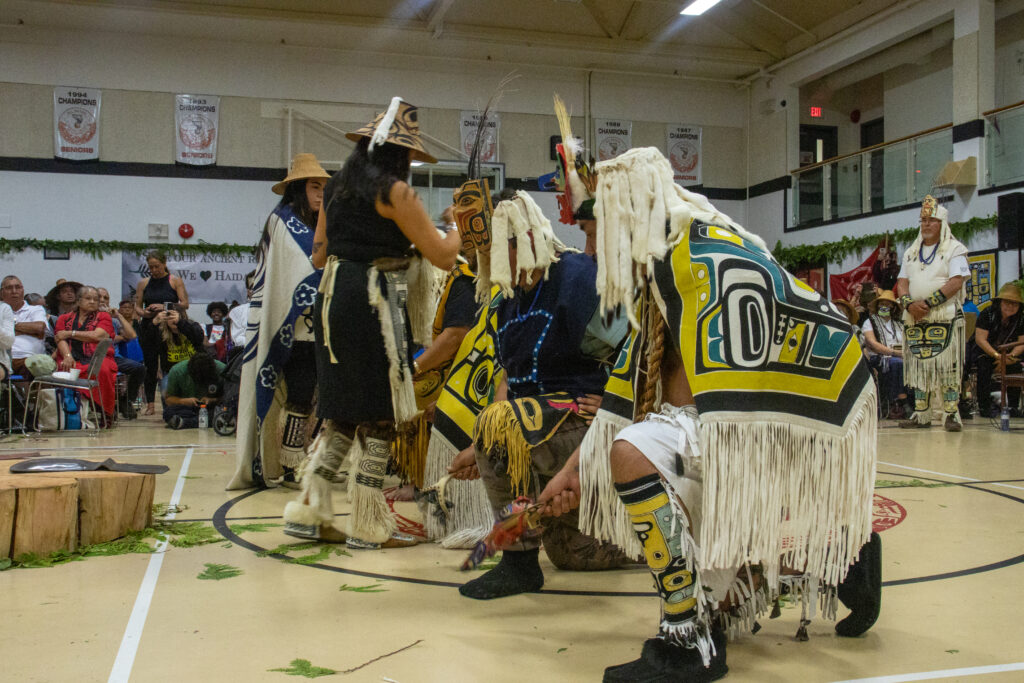 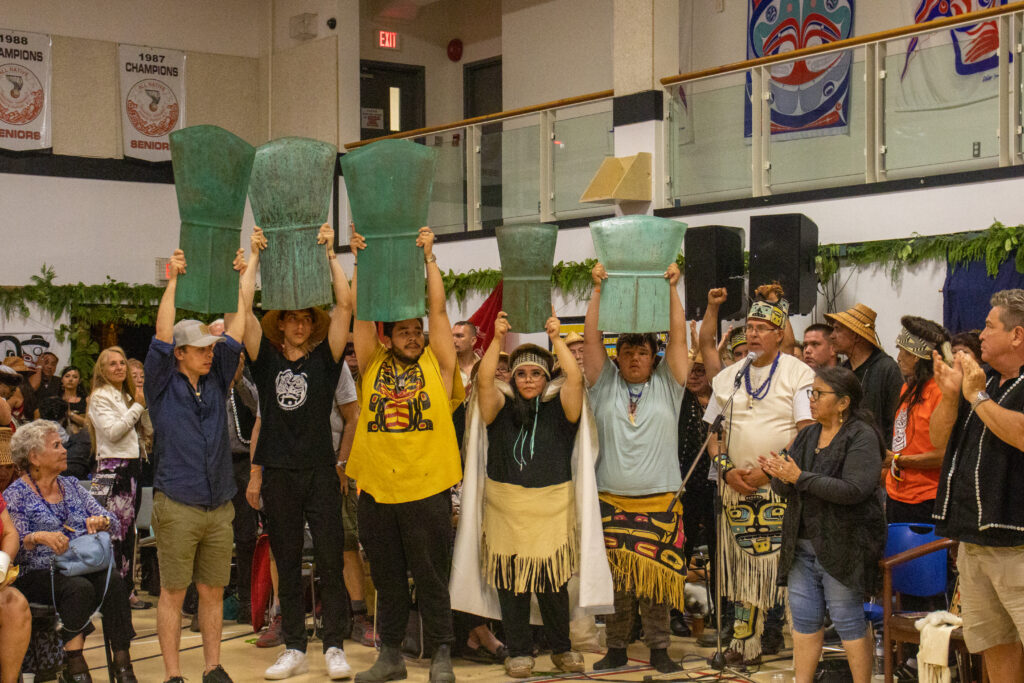