As today’s Coastal Guardian Watchmen carry on the time-honoured tradition and responsibility of caring for their coastal lands and waters, they’re making their ancestors proud.

In 1973, Captain Gold hopped into a 16-foot canoe and shoved off from Moresby Camp on Haida Gwaii, then paddled more than 160 kilometres south to Skung Gwaii—a once-bustling Haida village where no one had lived for more than 80 years.

“Skung Gwaii was alive, and filled with life, that summer as I saw it,” recalled Gold, who says he felt the love and power of his ancestors when he finally arrived at the village.

Gold’s journey was as much about cultural resurgence and renewal as it was about adding a presence to the region, and living up to a responsibility to protect the lands and waters of his homeland—a responsibility shared by all who call these coastal communities home.

When Gold was asked back then what was needed to protect the region, his answer foreshadowed the modern Guardian Watchmen programs of today: “Create wilderness camps manned by Haida, young and old,” he said, then added that any visitors should be educated by Haida ambassadors, who would make the necessary connections between the area’s unique cultural and natural heritage.

It was a precursor to the creation of the Gwaii Haanas National Park Reserve and Haida Heritage Site—a collaborative commitment from the Haida Nation and Canada’s Federal Government to protect these “Islands of Beauty” for future generations—as well as the foundation for today’s Coastal Guardian Watchmen.

The Haida Watchmen Program that grew out of Gold’s bold move and early ideas was similarly developed in communities throughout the North and Central Coast. The programs are modern expressions of the responsibility to protect these lands and waters, which have been a central part of the local laws and traditions of all coastal communities since time immemorial.

In 2005, at a gathering of stewardship technicians from all along the Central and North Coast, the Coastal Guardian Watchmen Network was created to support and expand the role of these local stewardship programs. Members wanted the network to support regional collaboration between First Nations and to develop a Guardian Watchmen training program. Now called the Coastal Stewardship Network, this program of Coastal First Nations – Great Bear Initiative supports stewardship offices in their work of implementing regional-scale land and marine use plans, and undertaking other sustainable resource management initiatives.

At an earlier annual gathering for the Coastal Guardian Watchmen, all participants were able hear Captain Gold share his story firsthand—a harrowing decades-old journey that’s as relevant today as ever.

During his presentation and throughout the three-day event, Gold shared his knowledge and wisdom with all Guardians, and offered advice to both young students and grizzled veterans. “Keep an open mind,” he told them, “as even the student can teach the teacher.”

In his presentation, Gold described his inspiration for making that lonely trip, and for choosing to live for years so far away from friends and family. “When I got to Skung Gwaii, I was welcomed by the spirits of the ancestors, kids and adults,” he recounted. “I could not believe how good that felt to me, so I stayed. I stood up and turned to see the vigorous forest growth claiming the village. I quickly made a shoreline fire and gave a silent prayer, ‘I am only here for a short time to do you honor and if I make a mistake, please forgive me.’” 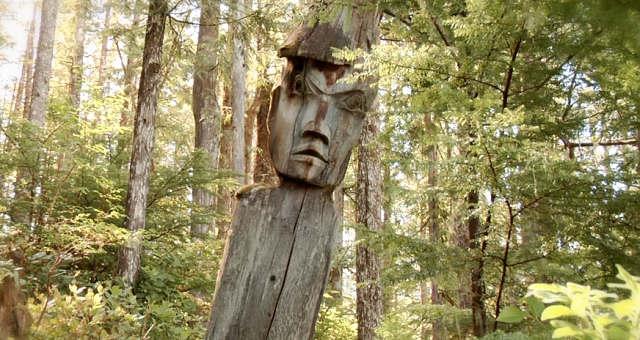