In conversation with Haida carver Jaalen Edenshaw, who has come a long way but still has a long way to go in protecting the lands and waters on Haida Gwaii. Text and Photos by Emilee Gilpin.

Jaalen Edenshaw is Ts’aahl (Eagle) clan from Skidegate, but grew up in Masset, where he makes his home today. Jaalen has been carving for over two decades and has seen many significant positive changes on forest protections on Haida Gwaii, but believes there’s “still a ways to go.”

Jaalen was working on carving a free-standing memorial sculpture for his friend Tyler Bellis’ tsinii (grandfather) Charlie Bellis. They were enjoying some of the last warm days of summer outside. Set up beside him, his nephew Tyler York works on an eagle that will sit on top of a clan pole that Jaalen and his brother Gwaii will do for a memorial for their chief who passed away ten years ago.

Inside the carving shed rests a 14-person ocean-going canoe, in its final stages, waiting for paint and a few touch-ups, Jaalen says. He’s hoping a buyer will consider donating it back to the land-based rediscovery youth camp at T’aalan Stl’ang, which has existed on Haida Gwaii since 1978. In another part of the shed, Jaalen shows a Skeedans chest he and his brother Gwaii have carved and painted, which will be housed at the Haida Heritage Centre in Skidegate. Like all parts of the living museum, it will be available for clan use.

Jaalen has grown up around the fight to protect his lands and waters on Haida Gwaii. When he was little, his community fought to stop logging in Gwaii Haanas and was able to protect that area. Sixteen years ago, they did a blockade and shut down logging outside Port Clements, and out of that came the land-use plan that protected “another third or so of Haida Gwaii,” he says.

“Our whole west coast is protected and our southern part [as well], and within that, there’s some cedar protected areas too, for cultural use,” Jaalen says. “I think there was real good work done, but we can’t stop and rest at what our leaders did then, we gotta keep fighting for this land, because the work is never done.” Pressure from industry continues, Jaalen says, complicated by Haida-owned and operated logging companies that he says “creates its own problems.”

“When you’re fighting against a company from America or Canada, it’s easy to gather together, but when we’re dealing with our own people, there’s all the relations and the complications that creates,” he says. “It’s something, as we grow as a Nation, we have to be able to deal with. We have to have those discussions, but it does make the fight harder, because you’re family.”

But Jaalen and his family stay focused on finding solutions, because natural places across the world are shrinking. Even though people look at Haida Gwaii as a “beacon of the natural world,” he’s watched natural sacred places across the island shrink around him.

“Sometimes it gets disheartening. I know the yellow cedar on Haida Gwaii is taking a big hit with climate change, which our weavers depend on for all their nahin weaving, and the monumental cedar we depend on as carvers, due to climate change, overlogging, introduced species,” he says.

These places are needed for “everything,” he says, and while some of the protections in place today may carry him through his lifetime, what about his kids and grandkids? “There is good work happening here. But there’s always more that can be done too.”

Tyler Bellis, someone who has spent his entire life around the logging industry, agrees.

Tyler Bellis has worked in logging, as a forest engineer, a cruise ship advisor for the Haida Forest Guardians, and land-use planning with the Council of the Haida Nation (CHN). He was on the joint management team that wrote the Haida land-use order and negotiated it, and one of the original members of the solutions table. In 2015, he served a three-year term for CHN.

Tyler says while the Haida Nation has made many leaps towards harder protections, he wouldn’t call today’s industrial standards “sustainable.”

“It’s far from it,” he says. “What I’m hopeful for is that we one day get rid of all of these tenures, the tree farm licences, and consolidate them—then you’re starting to look at what’s sustainable.”

Tyler says forestry needs to “cut less wood,” period. While people are still dependent on the logging industry for jobs, he says, the number needs to go down, and the wood needs to be used more wisely. “So much wood is still being sent off island every year and for the amount of jobs it creates, is it worth it? I’d say no, as a citizen, but when you’re in government, you have to negotiate,” he says.

“One year, we got a tree, hired the logging truck, and the loader—working at a premium, because they were working to get one tree out, as opposed to industrial logging—so those in the logging industry didn’t lose much money,” he explains. “We hired a miller to mill it up, and me, my brother, and Tyler worked for a year, no work lost. One tree provided three years of work for us.”

Not every tree can be a totem pole, Jaalen says, but Haida people have so many skills with wood, and that’s just an example of what could happen “if things are slowed down.” 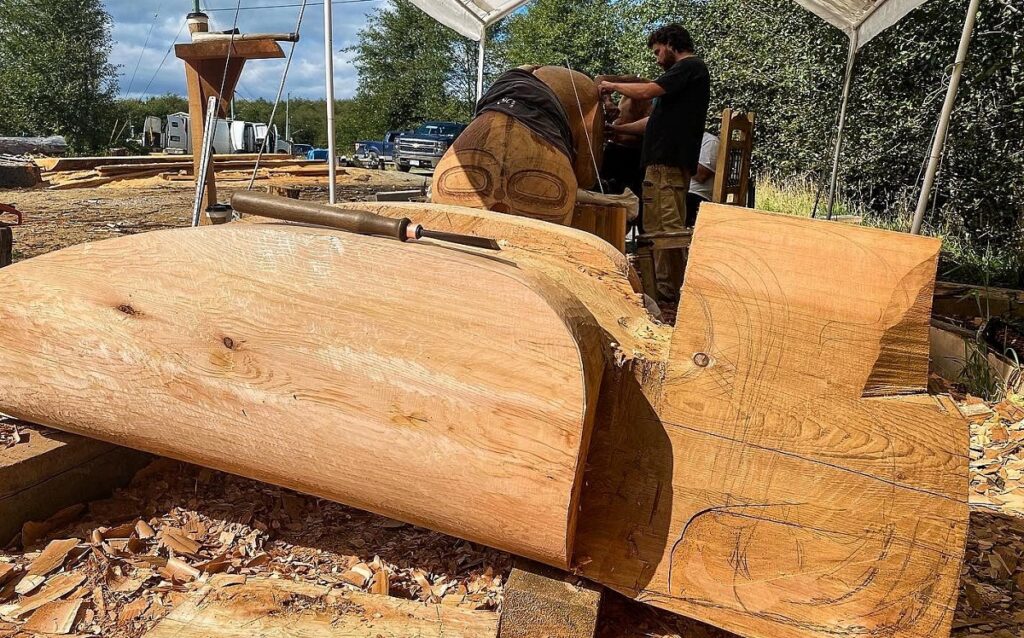 All the steps that have been taken, Jaalen and Tyler say—protecting half the island, protecting monumentals, protecting spots where supernatural beings are—people would have thought this impossible ten years ago.

“We’ve made some major pretty amazing changes,” Tyler says. “Even our spiritual places are covered now. And there’s tons of great stuff in our land-use plan that reflect Haida values and laws… as long as we keep moving forward and getting that cut lower, we’re doing good.”

“It’s easy to feel like things are stuck, and they do get stuck,” Jaalen says, “but the fact that this much has happened in this time is amazing.”

While Jaalen and Tyler work with their Nation to continue the legacy of protection of the natural world led by those before them, the western world is slowly catching up to Indigenous knowledge, Jaalen says. Perhaps a shift in understanding and values will amplify the call for harder protections and more regenerative and sustainable practices across all industries.

“It’s good science is catching up with us,” Jaalen says. “Every few years you hear a story, about a new scientific breakthrough, animals feeling pain or trees communicating, things we all know as Indigenous people.”

Jaalen grew up learning about the importance of the natural and supernatural world and the fight to protect it. When he was young, his parents would bring him around to visit Elders, listen to people and their stories. They would talk about the life energy of trees and other beings—in some stories, trees are directly related to humans, he says, and killer whales have relations in the human world.

“It’s not that all of that is gone, the supernatural element of this world hasn’t changed, it’s just that we’ve gone away from it,” he says. “It’s easy for us all to get caught up in the hustle and bustle.”

But it’s also easy to return, he says, and that’s what he hopes for: a return back to connection and an understanding of how to move forward in a good way.