As the Program Manager for Haida Fisheries of the Council of the Haida Nation since 2017, SGiids Kung (Red Moon) Vanessa Bellis says her leadership role in fisheries is driven by her love for the ocean, and a strong desire for conservation and sustainability.

WHY DID YOU DECIDE TO WORK IN FISHERIES?

I’ve grown up on the ocean, it’s always been a part of my life. I started with Haida Fisheries as a summer student,
then a Field Technician, then became the Watchmen Supervisor, then Operations Supervisor. When this job was
advertised, I had worked for the program for a long time and I felt I could do it. The longer I worked in fisheries, the
more I wanted conservation and sustainability, not just for my children and grandchildren but for generations
to come. Having Council of the Haida Nation be in charge of its own resources could ensure that.

WHAT IS ONE OF THE BIG STEWARDSHIP CHALLENGES YOUR COMMUNITY IS FACING?

Right now we work with all the different government agencies on Haida Gwaii and what we want is to be in charge
of our own resources in the future. So coming up with the recruiting and training of people is going to be challenging but I know that a long-term goal is for the Haida Nation to be the authority on Haida Gwaii. We’re starting with the Guardians and they work closely with DFO on joint patrols and monitor the traditional harvest and commercial
fisheries on Haida Gwaii – but moving forward we need to come up with a plan for more management of our resources.

WHAT IS ONE ACCOMPLISHMENT YOU ARE PROUD OF IN YOUR WORK?

One of the things I’m most proud of is becoming a certified occupational scuba diver. When I did the training in Campbell River, only one in 12 students was female. Fisheries is predominantly a male field and I’ve often been the only female on the dive team on a boat, but I think it comes naturally to me. I have three brothers and all of the cousins my age were male, so I always could hold my own.

WHAT DO YOU LOVE ABOUT DIVING IN THE OCEAN?

It’s so beautiful under there. It’s just a totally different world. It’s quite calming for me to be doing my work underwater. It’s something I’ve always enjoyed.

WHY IS WOMEN’S LEADERSHIP IMPORTANT IN CFN COMMUNITIES?

We come from a matrilineal society along the coast. I come from a long line of strong, resilient Haida women so it feels like a natural fit for women to be in leadership. That’s what I’ve seen, that’s what I’ve known. And I think women have a different approach to things – they can be strong leaders, but they can also be gentle in some situations if they have to be. I think women are very strategic thinkers and can read situations – and we’re multi-taskers.

WHO INSPIRED YOU AND WHY?

I think first and foremost it would be my Mom. Being so strong she raised us to be strong and to speak up for ourselves. Our father always told us we had to work hard for what we want. My parents have been very inspiring to me, but also in my job we had May Russ, the Senior Executive Director in CHN. We lost her last September and it’s had a ripple effect through the Nation. She’s always been very inspirational to me. She worked so hard for her Nation and in her personal life. So many people have inspired me – my Naanii (grandmother), also. She was so resilient and strong.

WHAT HAS BEEN THE MOST SIGNIFICANT BARRIER IN YOUR CAREER?

As a woman, I’ve felt I’ve always had to prove myself and I’ve always had to work twice as hard as any man to get to where I am. Working in fisheries is a very male-dominated field; whether it’s working physically alongside the men to show them you can do it or not being taken seriously when I need to bring something forward.

WHEN YOU FACE CHALLENGES IN YOUR WORK, WHAT INSPIRES AND ENCOURAGES YOU TO CONTINUE?

When I’m faced with challenges, I always keep the strength of my Mom and my Naanii with me. It’s definitely not an easy position being a woman in charge, but I want it to be the norm, and that people will have to get used to it because women are going to start speaking up and taking over these leadership roles. I’ve had some very challenging times in the last five years working in Haida Fisheries and my Mom was always my rock in helping me get through it. Along with my husband – he supports me 100 per cent. I would not be able to do it without their support.

WHAT WILL BE THE BIGGEST CHALLENGE FOR THE NEXT GENERATION OF WOMEN LEADERS?

I think there’s always going to be that stigma about women being in charge, and maybe in the future there will be less. I see the confidence in my children. My daughter being a teenager, I see how strong and how fierce she can be. It gives me hope for the future that we will overcome this stigma.

WHAT ADVICE WOULD YOU GIVE TO YOUNG WOMEN WHO ARE TAKING ON LEADERSHIP ROLES?

You just have to work hard and stand up for what you believe in in and don’t be afraid to ask for help along the way.

A mother of four, Vanessa lives with her husband Noel in Masset on Haida Gwaii, where she was born and raised. She grew up with a deep love of the ocean and has always been comfortable in the waters of Haida Gwaii. She was a competitive swimmer for five years and swam year-round in the ocean in front of her house. 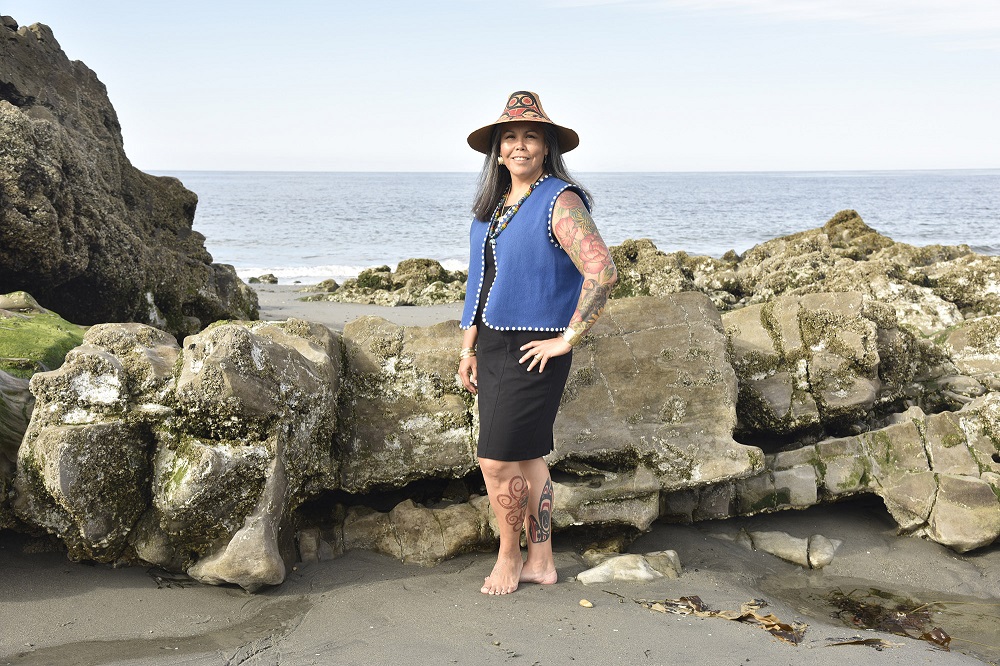