Indigenous Health Dietitian Jess Newman describes her love for traditional food and her leadership role in tackling health issues that face many families in coastal communities. She is Haida, Heiltsuk and Kwakwaka’wakw, and was raised in her mother’s community of Skidegate on Haida Gwaii while spending summers in her father’s community of Bella Bella in Heiltsuk territory.

HOW DID YOU BECOME INVOLVED IN YOUR WORK AS A DIETITIAN?

When I was in my teens, I knew that my grandmother and my great-aunt had diabetes but I didn’t understand what
that meant for them, and I don’t think they understood what it meant for their health as well. I feel that had a lot to do with racism in the healthcare system, as well as our community not having access to good care, so I wanted to be involved to try to change that. And I knew dietetics is a field that connects nutrition with wellness.

My work now focuses on food security and Indigenous food sovereignty. Recently our Aboriginal Health program
approved a proposal I submitted, to create two knowledge keeper positions in north Island communities to work in food security and food sovereignty. That was one of my most proud moments as a dietitian. I also work in diabetes prevention and management and do diabetes education in schools which is very much my passion.

WHAT DOES INDIGENOUS FOOD SOVEREIGNTY MEAN?

Food sovereignty means the community has control over its own food system – a system that is tailored to its cultural needs and specificities, and often means reverting back to our old traditional food systems. Trying to further Indigenous food sovereignty is quite a task because communities have been displaced from their traditional territories, so they don’t have access to their hunting, fishing and gathering lands. As well, government policies that prevent harvesting and hunting and engaging in our old food systems are at the core of the bigger problem in accessing food. I feel if there were fewer regulations and restrictions around access to our homelands for harvesting, our wellness would be greatly increased.

WHAT IS ONE OF THE BIG CHALLENGES FOR YOUR COMMUNITIES IN TERMS OF FOOD AND HEALTH?

Definitely remoteness and lack of access to nutritious food choices. For example, Kingcome, like many communities, has to have groceries transported in by plane and boat. Every transportation step requires a fee which makes groceries ridiculously expensive. It’s also the entire system of displacement and government policies that prevent our people from being able to harvest or fish. Our entire way of life has been impacted due to ongoing colonization, and all of these things add up to huge challenges around food and health.

WHAT IS AN ACCOMPLISHMENT YOU ARE PROUD OF IN YOUR WORK?

When I first graduated and moved back home to Skidegate, I created a successful diabetes group. I have a family member with diabetes, and I encouraged her to come. She hadn’t told anyone she had diabetes because she was ashamed, but after a few months she was able to stand up and tell the group that she had diabetes. It felt good to know that I created a safe space, a place for people to connect. Many people with diabetes tend to feel like their condition is their fault – but it rarely is.

WHY IS WOMEN’S LEADERSHIP IMPORTANT IN FIRST NATIONS COMMUNITIES?

I believe it’s so important for young Indigenous women to see women who look like them in positions of power
because it makes them feel it’s possible. I had that growing up. I saw women going to school and in those leadership
positions and that made me believe I could get here.

WHO INSPIRED YOU AND WHY?

I was so lucky to have many incredible role models growing up – but I would say my two grandfathers. They devoted their lives to the betterment of Indigenous peoples. The change they were able to create inspired me into a role of service. That’s why I do what I do. They are two of the best men I know.

AS A WOMAN, WHAT HAS BEEN THE MOST SIGNIFICANT BARRIER IN YOUR CAREER?

This is a tough question because I don’t feel that I’ve faced any barriers in my career because I’m a woman. Working
in healthcare, it’s almost all women. I would say I’ve been really supported and uplifted by women in my career, and
I see that more and more. Women are supporting women and it feels like lots of change is happening.

WHEN YOU FACE CHALLENGES IN YOUR WORK, WHAT ENCOURAGES YOU TO CONTINUE?

I would say again the women that I work with. At Island Health, we have an Aboriginal Health team and all of the managers and directors are Indigenous women. And the ones that aren’t are also amazing women! We all inspire and support each other.

WHAT WILL BE THE BIGGEST CHALLENGES FOR THE NEXT GENERATION OF WOMEN LEADERS?

Racism within our systems and society. I felt it and I know it’s still there, of course. Racism is so ingrained in our society and I feel there’s not enough education in our system. It’s very complex – I can’t say whether racism will get
better, but it seems that more people are willing to educate themselves and there are so many great resources out there. It makes me feel positive that people are willing to take that step.

WHAT ADVICE WOULD YOU GIVE TO YOUNG WOMEN WHO ARE TAKING ON LEADERSHIP ROLES?

I would say they are difficult, but they are fulfilling roles and at this level you’re able to effect change and that’s really exciting. It’s hard to find work that’s meaningful. I would say go for it because we need you!

WHAT ARE YOUR ASPIRATIONS FOR INDIGENOUS FOOD SOVEREIGNTY FOR THE FUTURE?

It’s an exciting time. I think COVID is bringing a focus to our food systems that’s really empowering communities right now. Food is so linked to our identity and our wellness. Our food connects us to our ancestors, which is why it’s so powerful. If we have that tie to our foods and our land, our wellness can only be enhanced. Food is love, food is medicine. Food connects families, it connects communities, it connects Nations.

DO YOU HAVE A FAVOURITE TRADITIONAL FOOD?

Sockeye. It’s so connected to my upbringing. I love fish soup. I have such good memories of my Dad taking the fresh
fish out of the ocean and cutting it right there, then cooking it on the boat. And sitting with my family enjoying each other’s company and amazing fresh sockeye. Fish soup has a piece of my heart.

Coming from two fishing families, Jess had access to many traditional foods growing up. Her love of this food and her concern about the health issues faced by family members with diabetes inspired her to pursue a career in health and nutrition. She graduated from UBC in 2015 as a Registered Dietitian and now works with communities from the Kwakwaka’wakw, Nuuchah-nulth, and Coast Salish family groups on northern Vancouver Island. 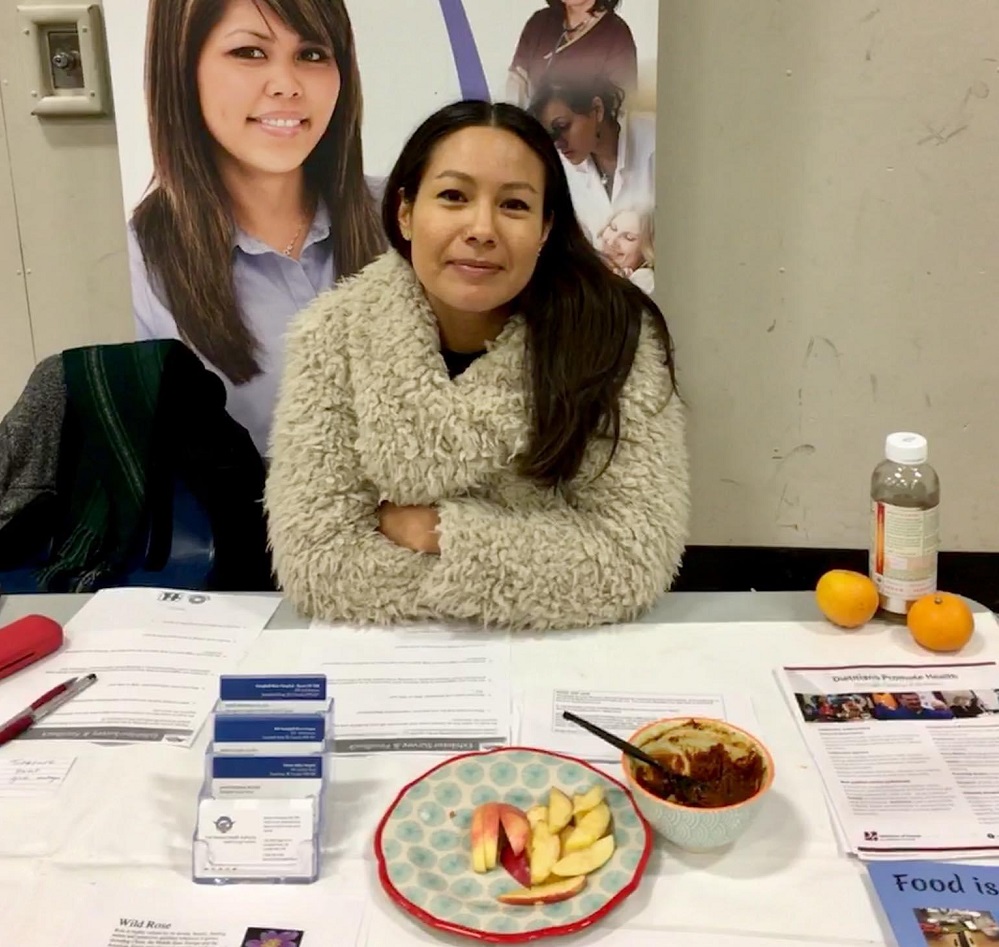