A keystone species across the Pacific North Coast, salmon is the lifeblood of coastal economies, culture and traditions, having sustained First Nations here for thousands of years.

Five salmon species—chinook, chum, coho, pink and sockeye—help shape the entire coastal food web, from the open ocean to the freshwater streams and rivers that reach far inland, where bears and other terrestrial species bring this rich nutrient source deep within forested habitats.

After a century of mismanagement, climate change and overfishing, salmon populations across the North and Central Coast are declining rapidly, with some returns at their lowest point ever recorded. “Basically, the bottom has dropped out of salmon abundance—in some areas, as low as 10 percent what they were just 15 years ago,” says Larry Greba, who leads Coastal First Nations’ fisheries program and has worked for years developing the Kitasoo/Xai’xais Nation fishery program. 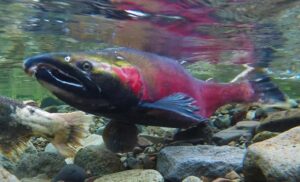 With Fisheries and Oceans Canada (DFO) not providing effective salmon assessments given reduced funding and resources, Greba says coastal First Nations have had to pick up the slack for salmon monitoring. “First Nations can collect this data more efficiently than anyone else,” he says, by tracking freshwater salmon survival in streams throughout the coast. “It’s essential to do this kind of intensive monitoring, which provides the baseline data needed to manage these fisheries into the future.”

Greba says fisheries technicians, Guardian Watchmen and other stewardship staff within coastal territories have been monitoring salmon for years using a range of strategies and techniques—including escapement and catch monitoring, juvenile salmon monitoring and genetic analysis based on DNA tissue samples. But he says these efforts must be enhanced and expanded to get a more comprehensive picture of current salmon populations and survivability.

“Traditional knowledge is another key ingredient in comparing this data with the baseline for historic salmon populations,” says Greba, since populations have decreased so dramatically over several decades. “Some student coming out of grad school doesn’t see that traditional baseline,” says Greba, which is why it’s important to speak with Elders who can relay memories or knowledge passed down over time. “Those stories get passed along and they fill in gaps in the research,” he adds. “When the data and information is murky, we need that earlier knowledge to help complete the picture.”

It’s one thing to prioritize salmon monitoring, but the big challenge is implementing an effective, coast-wide monitoring program to help manage these important fisheries—especially given the recent historic signing of the Fisheries Resources Reconciliation Agreement (FRRA), which establishes a framework for co-governance of fisheries resources. As coastal First Nations take a lead role in managing salmon and other fisheries, maintaining effective monitoring programs that produce high-quality data is of critical importance.

“There’s a lot we don’t know about salmon declines,” says Will Atlas, who has worked with the Heiltsuk Nation for nearly a decade, implementing a salmon research and monitoring program within Heiltsuk territory. He adds that although the factors affecting salmon abundance are varied and complex, we already know the main causes—climate change, overfishing and industrial logging, which together have devastated freshwater habitats and altered river flows dramatically, exacerbating the negative effects of droughts and extreme storms that result from a changing climate.

Atlas says coastal First Nations can control some of these issues by ending destructive logging practices in upstream areas in their territories, and by reducing exploitation of fisheries through limiting catches and enforcing strategic closures. “But there is also a need for more hard data,” he says. “Increased monitoring will help answer those key questions: How many salmon are coming back? How many do we need to support fisheries?”

Atlas has also worked closely with Kitasoo/Xai’xais, Nuxalk and Wuikinuvx Nations on salmon monitoring initiatives, and recently worked with First Nations, the Pacific Salmon Foundation and DFO to develop a strategic plan for coordinated salmon monitoring across the Central Coast—a framework that’s grounded in the values and priorities of those Nations. Such an integrated monitoring approach will provide much-needed coordination and standardization to support effective co-management of salmon populations in coastal territories.

“It is critical that we strengthen the connections between our communities, our environment, and our economy, for the future of wild salmon and the broader environment they depend on,” said CFN President and Heiltsuk Chief Marilyn Slett, who was appointed co-chair of the Wild Salmon Advisory Council in 2018.

In its Wild Salmon Strategy released a year later, the Council recommended priority actions to help restore and enhance wild salmon populations, and ensure sustainable fisheries management into the future. The first step in making that happen, says Slett, is for First Nations to play a lead role in salmon management, which is already underway through the FRRA. Another key priority is to build upon existing salmon monitoring efforts throughout coastal territories, by investing in Guardian Watchmen and other programs, and providing resources that make their vital work possible.

“Coastal First Nations support the re-emergence of a conservation-based economy,” says Slett, “while taking into account the cultural and ecological diversity of our territories, and the responsibility to maintain and protect the lands, water and resources within them.” Ultimately, a sustainable future for coastal communities depends fundamentally on healthy and thriving salmon populations.