Brothers Reg and Robert Davidson settle into Reg’s carving studio in Old Massett, Haida Gwaii, coffee in hand, one foggy late September morning, weeks before they raised a memorial pole for their beloved son and nephew.

The late Tlajang Nang Kiingaas Benjamin “Ben” Ray Davidson is Robert’s son, Reg’s nephew. He died of a heart attack in August, 2020, at the age of 44 during the height of the COVID-19 pandemic. Thinking back on Ben’s life, his curiosity, generosity, the impact he had on his family and communities, his father and uncle say that his Spirit will live forever.

‘He gave back right away’

Ben was raised in a family of prolific carvers and hard working people. Their list of individual and collective accomplishments is too long and significant to be contained by a single story — they are simply two of the most celebrated and talented artists and carvers of the century. In June, both Reg and Robert were appointed to the Order of Canada for their work and Reg was a recipient of the BC Achievement Foundation’s Fulmer Award.

When asked how long he has been carving, Reg responds with a half-joking, half-serious question: “In this lifetime? Probably over 50 years now… been doing wood since maybe 1980.”

His older brother speaks up, “Reg is too modest, I’ll brag about him. He started when he was 14 on the totem pole in 1969. He didn’t carve before, just came down and started adzing away, so really, he started in ‘69,” Robert says.

“I feel we come from a really good work ethic family, our grandfather was always working, our dad, the whole family, so we learned to be self-motivated — that’s what created our journey.”

Robert started carving at the age of 13. The pole he raised in 1969 was the first totem that had been raised in a century due to the oppression of the Church and State. The entire learning process ignited further a curiosity of his history, because before then, “there was nothing, absolutely nothing.” That’s when he, who was 22 at the time and his brother Reg who was 14, started learning songs, he says.

His son Ben shared in this willingness to dig deep and learn more about their history, family, clan and culture. Robert and Reg remember him as curious from a young age, but also ready to share with others whatever he learned.

“He started learning carving here, but his wife is from Skidegate and he moved there and became a big part of Skidegate teaching people,” Reg says of his nephew. “When he was here he was still learning, but when he moved to Skidegate, he knew so much about carving, he started sharing what he knew.” 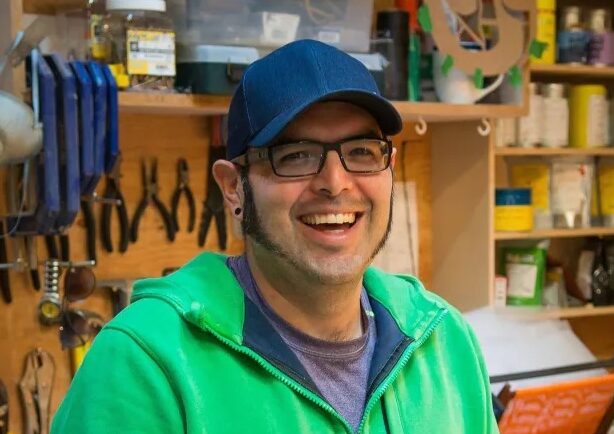 “Whatever I knew I would let him know, or he would talk with his father-in-law, or Reg,” Robert says. Ben also loved being with and learning from his Tsiini (grandfather) growing up, Reg says.

“He just loved working with our father, ‘cause our father worked hard. He found a tough way to do things all the time, kinda ranga-tangy, but Ben had fun with him,” Reg says. “My dad had a boat that always broke down… Ben was out fishing with my dad once and they broke down and he used a little motor to come home. He let Ben steer and he was pretty proud of himself for taking his Tsiini home.”

At his young age, he learned so much that he “started giving back right away,” he says. The two men recognized Ben’s generosity from a very young age.

“I remember when we were in New York installing the PepsiCo Sculpture Gardens, Ben was about 10, we were taking a cab somewhere, and he gave me money to help pay for the cab, I couldn’t believe it, he wanted to help out at that age,” says Robert of his son. “That was a very strong ethic right until his end.” His learning journey had no end, Robert says.

‘When we raise it, when everything’s done, it makes it real’

On October 15, a 30-foot memorial pole was raised in honour of Ben as hundreds of people traveled from far and wide to witness the work. The family held a feast in the afternoon and evening, dancing Ben’s masks, sharing stories and speeches, honouring Ben and his loved ones.

Ben had been planning to do a pole, teaching and including community members to be a part of the process. Reg wanted to honour his wish by carving a pole and inviting anyone who wished to work on it to join, he says.

“I was emotionally moved when Reg first mentioned he was going to be doing a memorial pole,” Robert says. “I was very grateful for this thought to do this… it’s still hard to believe for me, and for a lot of people, that he’s gone, but he’s not really gone.”

Robert says his son has tricked him a few times, sending him messages, crossing his mind at serendipitous moments.

“He’s here with us in Spirit. I think of all of the lessons he gave us through his generosity, his tenacity, his work ethic, always wanting to be the best he could be — that all lives on.” 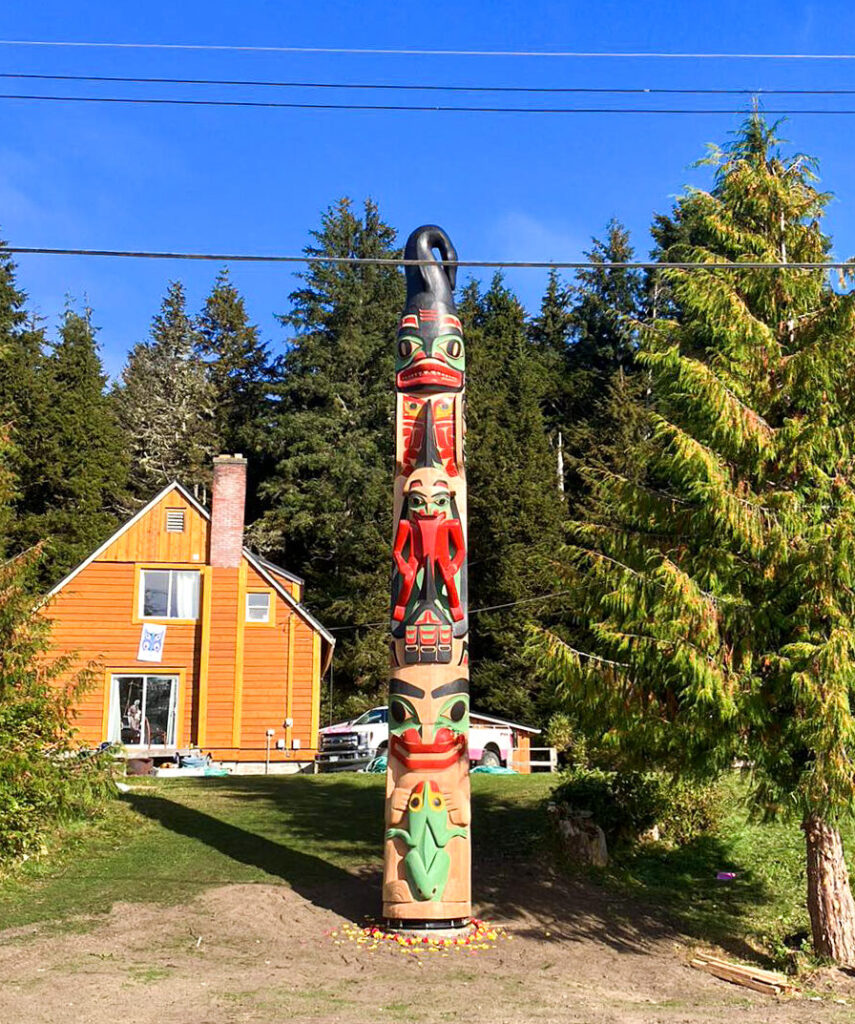 Reg was the main carver on the pole. The first cut, he says, was this year, on March 9. He took one month off.

“Robert worked on the pole for about a month, his apprentice for two weeks. “I hired Corey Bullpitt, he worked three weeks. Gene Davidson, about two weeks, same with David Jones. Tony Green, he said he’d come in every Friday to work on the pole for free. I eventually hired him for two days a week,” Reg says.

Reg often starts his carving at four in the morning, depending on where he’s at on a project, he says. In those quiet morning hours, and the noisier ones full of family and friends, he’s had time to reflect on his nephew, on their time together and the many people he’s inspired throughout his life.

The bottom figure of the pole is a bear, one of Ben’s crests. The frog represents his wife Tawni’s crest. The middle figure is the top of a raven rattle. “I’ve looked at a lot of photographs and the human body had a human face and there was a couple with a wolf, and a couple with a bear. So I put a bear face on the human, ‘cause that’s one of Ben’s crests,” Reg explains.

Ben’s Naani (grandmother) gave Ben their dad’s name, Reg says, Tlajang Nang Kiingaas “he who was heard of all over,” which is a Chief’s name. “In her mind, she recognized that he was worthy of being a Chief,” Reg says. “When they do the Chief’s headdress, this is what they use, the raven rattle, so that’s why I put it on there. And on top is a shark, one of their main crests.”

“In my mind, I thought Ben would make a great Chief,” Robert says.

“He had a charisma that a person in leadership needs to carry. He had that willingness to go the second mile. He had an ability to draw people together.”

Ben often told the story when he moved from Masset to Skidegate and “all he had was his tools,” Robert says. Then he bought a house, trading one of his masks as a downpayment and later built a studio and a “first-class” gallery his father says “rivals galleries in the city.” “He had it in him to continually better himself,” Robert says.

It wasn’t always easy, Robert says, being a father, but his late son taught him in ways he couldn’t have imagined and later in life, became one of his closest and dearest friends.

“He was a challenge. He taught me a lot about being a father. I can’t say I was a very good father… I was separated from his mother when he was young. When I had them, I vowed to never treat them the way I was brought up… not to blame my parent’s generation, because they came from residential school teachings,” Robert says.

“Our father was pretty tough on us. He wanted us to be self-sufficient, and so Ben, I was rough on him, until he fought back, not physically, but verbally. And when he did, I said, ‘oh, I became the way I didn’t want to be,’” he says. That’s when Robert started doing the “inner work,” to be a better father to his kids.

“Very much like my dad and I, over the years, Ben and I became really good friends. We had a lot of phone visits, maybe five or six times a week. And so we were friends more than father and son.” When Ben finished school he wanted to return to Haida Gwaii and apprentice. He went to stay with his uncle Reg at the time.

“It was challenging, because he just turned 19 and was living in the village,” Reg says with a smile. “He was pretty patient with us. Just the same experience with our father where we’d rebel when they’re telling us how we should do things… he had a big heart with everybody.”

Reg remembers being with a friend of his that he goes prawn fishing with every year.

“They were at the All-Native and Ben came down in the room and the guy said, ‘I like your shirt,’ and Ben went back up, took it off, put another one on, folded it and gave it to that man,” Reg says. “That’s just the way he was.”

Ben became known as an avid cyclist. He loved his bikes and he loved cycling, Robert says. He lived in Daajing Giids and often cycled to his studio in Skidegate, about six miles. He’d take his children with him too, teaching them commitment, and compete in their annual triathlon, inspiring others to stay active.

“His dedication to his kids…I complimented him several times, I said, ‘you’re further ahead than I am when I was your age. You’re a better father than I was,” Robert says.

Listen to part of the interview here:

Read more about Ben, from the words of his sister Sara Florence Davidson here.

Learn more about Haida culture, history and potlatch teachings from ‘Potlatch as Pedagogy’ by Sara and Robert Davidson here.

Learn more about the life and work of Robert Davidson in a short-film ‘Haida Modern.’