Bella Bella, BC (Wednesday, October 11, 2017) – This week marks the one-year anniversary of the oil spill in Bella Bella. With the community’s recovery efforts undermined by government and Kirby Corporation’s refusal to take responsibility for the spill and to cooperate in its aftermath, the nation has no option but to turn to the courts.

“The oil spill continues to be a catastrophic injury to our food sources, culture, and economy,” says Heiltsuk Tribal Council Chief Councillor, Marilyn Slett. “Thanks to Kirby Corporation and the governments of British Columbia and Canada, our community’s road to recovery keeps getting longer and longer.”

Kirby Corporation and government have kept information secret about what occurred on October 13, 2016 when the Nathan E. Stewart grounded, sank and spilled oil into Gale Pass. The Heiltsuk Tribal Council made numerous separate requests for information to the polluter (Kirby Corporation) and various government agencies, including Transport Canada, the Transportation Safety Board, and the Canadian Coast Guard. Those requests were largely denied or ignored.

This secrecy and lack of collaboration has continued throughout the post-spill recovery.

“Recently, we learned the B.C. Ministry of Environment and Kirby have been secretly negotiating an agreement on the post-spill environmental impact assessment since early this year,” says Chief Councillor Slett. “Since this nightmare began, the polluter and provincial and federal governments have ignored our questions and environmental concerns, our collaboration attempts, and our rights as indigenous people. We have no choice but to turn to the courts.”

The nation is preparing to take legal action, aiming to recover damages suffered by its members as well as to examine the actual state of Canada’s “world class” oil spill response system.

The case will seek compensation for loss of commercial harvesting of marine resources and infringement of Aboriginal rights relating to food, social and ceremonial importance of marine resources — factors that the current oil spill liability framework does not account for.

“When I’m not harvesting Gale Pass to feed my family, I am working there as a commercial fisherman, earning an income to support them – and I’m one of many,” says harvester and volunteer oil spill responder, Robert Johnson. “Despite our reliance on Gale Pass, the governments of British Columbia and Canada and Kirby the polluter have little interest in understanding the impacts of this oil spill on the health of my community, this environment, or our economy.”

The existing oil spill response framework excuses the polluter and government from full responsibility for oil spill impacts on Aboriginal rights otherwise protected by the Constitution. As such, the government of British Columbia and Kirby are not required by law to do comprehensive impact assessments of the oil spill. To date, they have rejected multiple Heiltsuk requests to participate in a study of the current and long-term impacts of the oil spill on the health of the ecosystem and marine resources and the social and economic consequences associated with the loss of harvest and use of the impacted area. Instead, Kirby Corporation and the BC Ministry of Environment are proposing a limited environmental assessment covering a minority of the area and species affected.

Heiltsuk Nation will be asking the courts to assess whether this existing regime of liability for oil spills can really be considered constitutional. 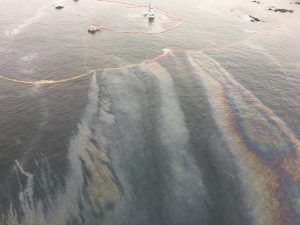 Kelly Brown, Director of the Heiltsuk Integrated Resource Management Department says “We’re learning the hard way that indigenous people and coastal communities can’t count on polluters, Western Canada Marine Response Corporation, or the governments of B.C. and Canada in a crisis situation. For our sake, and the sake of our neighbours, we are consulting with a range of experts to assess damages, recovery times, and, ultimately, determine how we can prevent a similar disaster in the future.”

Analyses of the oil spill response have revealed massive safety and planning oversights by the polluter and federal and provincial government regulations. They include: a lack of spill response materials; ineffective booms and delays in employing them; a lack of safety instructions and gear for Heiltsuk first responders exposed to diesel and dangerous marine conditions; and confusion over who was in charge in the early hours of the oil spill.

“Government representatives travel the province, country, and the world preaching reconciliation and nation-to-nation relationships with first people. Meanwhile, back home, they are avoiding our calls and emails, excluding us from meetings, and ignoring our rights,” says first responder and Hereditary Chief Harvey Humchitt. “If the courts have to explain that this is not what nation-to-nation relationships and reconciliation look like, so be it.”

The Heiltsuk Tribal Council expects the results of the various impact assessments, legal analyses, and evaluations to materialize in the coming weeks and months.

To arrange an interview, please call or email: