In late January, the magic of Haida art was brought to life for audiences at this year’s Sundance Film Festival in a film by Haida director Christopher Auchter.

Now is the Time revisits the story of Haida artist Robert Davidson who, at 22 years old, set out to carve the first new
pole in Haida Gwaii in almost a century.

Auchter spoke to Coastal First Nations before attending the prestigious festival. His short documentary was one of 74
selected from more than 10,000 submissions.

“It’s really amazing to be going to Sundance,” said Auchter. “I like that the film is reaching an audience that knows nothing about West Coast First Nations, but is still intrigued by the resilience, hope and strength of everyone coming together to make that day happen.”

The raising of the pole in Old Masset on August 22, 1969, would be a turning point for the resurgence of Haida culture.

When Davidson set out to carve a pole for the Elders, his Nonni Florence Davidson told him none had been raised in his village since her birth in 1895. For decades, Canada’s Indian Act had outlawed Haida ceremonies, suppressing the songs, dances and art.

“I saw the old totem poles at the museums and I saw them in photographs, and I’d come home and there was nothing,” Davidson recounts in the film. In an archival recording, Elder Joe Weir remembers missionaries saying, “If you don’t get rid of these totem poles, you’ll never go to heaven.”

Making the film made Auchter realize how deeply asleep Haida arts had been for so many years. “I was born just over a decade after the pole-raising, so it was normal for me to see our artwork.”

“I’d come upstairs and my mom and Auntie Shelly would be tracing a design on the window so they could make a button blanket. I’d go to feasts where Guujaaw and others would be singing the feast songs. Kids like Willy Russ would be in the Haida dance groups.”

“I didn’t know there was a time when this wasn’t happening.”

Interviewed in the film, Haida scholar Barbara Wilson says the act of raising the pole was important because, “it was a deliberate bringing back of that part of our life.”

The filmmaker credits Wilson for the film’s existence. As a member of a National Film Board Indigenous film unit, she led a crew to the story in the 1960s. When the 50th anniversary approached last year, Wilson asked the NFB if a new version of the original film could be made.

Was Auchter as nervous in retelling the story as Davidson was about carving his first pole?

“Oh, big time. I didn’t want to misrepresent,” he admits. “I was really taken by that with Robert as well. How honest and candid he was. At first, Robert could not even bring himself to look at the log he was about to carve, he was so scared. It was beautiful his account and the way he shared the story.”

Where to See the Film

For a free community screening copy, contact: info@nfb.ca (A Haida Language version will be available) 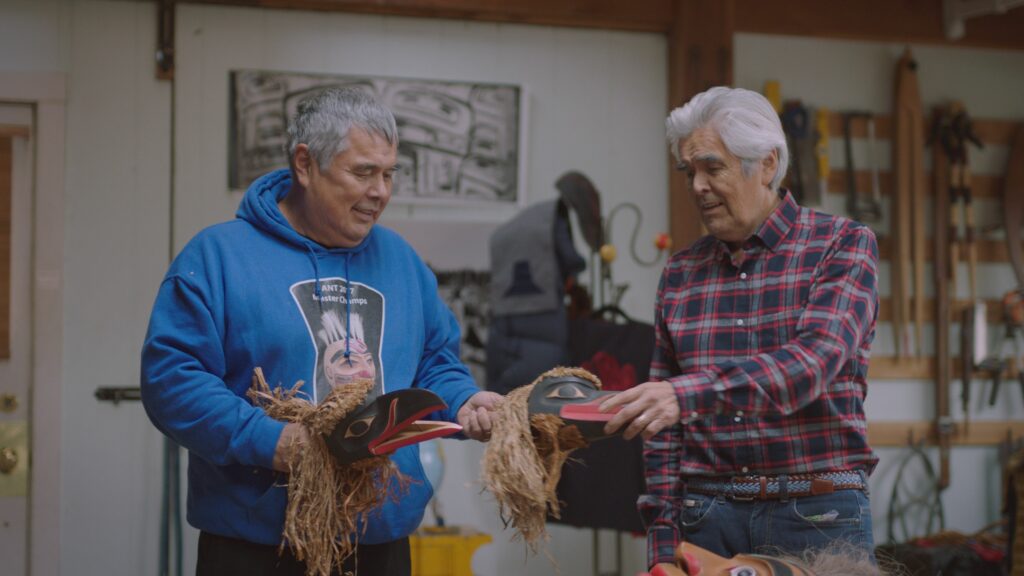