When you meet Laadaa, Stewardship Director for the Haida Nation, you’ll know immediately where he stands and where he’s coming from, and it won’t be long before he’ll share a few deeply held beliefs that provide the foundation for his work.

As with all Stewardship Directors for CFN-GBI Nations, Laadaa (Colin Richardson was his English name) has a lot on his plate, and what he’s tasked with on a daily, weekly and yearly basis would make your head spin. He provides overarching direction for stewardship activities throughout Haida Gwaii and directs four departments for the Council of the Haida Nation (CHN)— Fisheries, Marine, Heritage and Natural Resources, and Protected Areas—ensuring all efforts meet the Nation’s expectations.

In addition to that already full slate, Laadaa meets quarterly with the Stewardship Directors Committee—where senior directors from each Nation can work together with CFN-GBI Program Managers, Senior Policy Advisors and the Board to help implement strategic land and marine use agreements from regional perspective.

“It’s a great way to open up dialogue and also keep it going,” says Laadaa, adding that the regular meetings bring in expertise from all Nations and ensure the best available knowledge is used. Regarding his specific role on this and other regional committees, Laadaa says it’s important to share updates with other Nations and lessons learned based on the unique “Haida way” to stewardship. “We have great strength in our culture and we’ve never lost that identity,” he says, adding that the concept of Yah’guudang (“respect for all things”) is at the heart of all Haida land and marine planning.

Yah’guudang is about respect but it’s also about responsibility, says Laadaa, and every Haida person is born with a life-long responsibility to protect this place—just as other coastal people are compelled to care for their homelands as well. “I see that same burning passion for protecting these lands and waters in all the people that I work with,” he says.

Laadaa points to Coastal Guardian Watchmen and stewardship training programs run by CFN-GBI, as clear examples where that passion is being brought to the surface. “These programs are great for building new skills, but more importantly, they build confidence,” he says. “I see some students start off shy, lacking in self-esteem, but by the end of training or a bit of time on the water, they’re far more confident. It’s a beautiful thing to see.”

For Laadaa, confidence was never an issue. But like anyone who’s lived within the past century or so, there have been many threats to it. “I remember waking up as a boy and feeling hopeless; just a general lack of well-being,” he recalls. “But my father instilled values and tenacity in us, so we could deal with any situation. It gave us the will and confidence to make our way, and I never lost that.”

Laadaa says he loves to see a growing pride and determination in the stewardship work that’s happening throughout Haida Gwaii and along the North and Central Coast—it’s critical for establishing sovereignty and authority, but also for keeping young people connected to the land. “I see true hope in this,” he says. “It’s very powerful to see.”

Asked whether the unique “Haida way” has positive lessons to share beyond Haida Gwaii and other coastal First Nations, Laadaa gets straight to the point, as always: “Of course it does. We kept this island intact for thousands of years just fine, and in the last 100 years the industrial machine has wreaked havoc on these ecosystems. I believe our way is far more balanced and logical.” 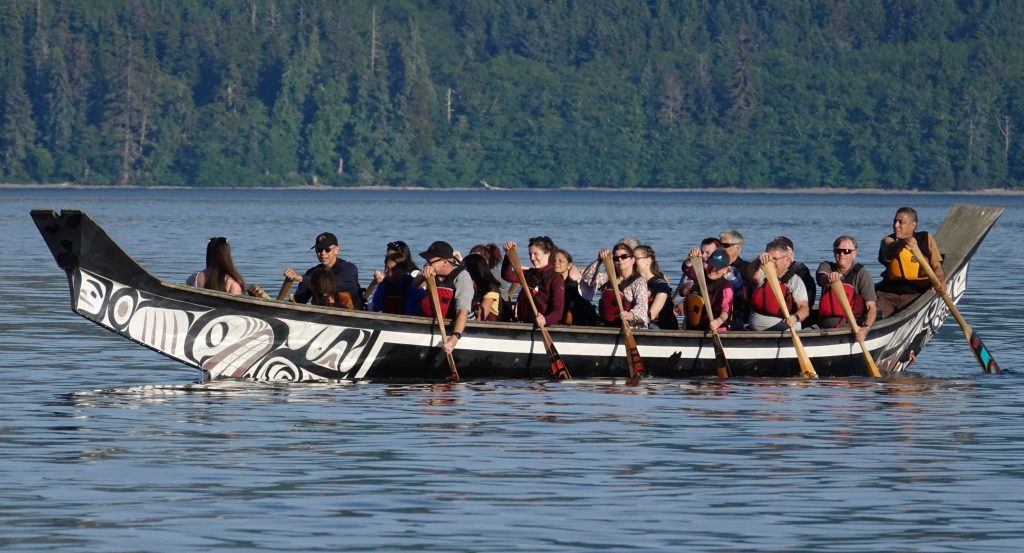