The Connected Coast project aims to bring high-speed Internet to 139 rural and remote communities, including 48 Indigenous communities, along the North and Central coast, Haida Gwaii and Vancouver Island. The partnership between City West, the federal government, the province of B.C., Strathcona Regional District on Vancouver Island, was first announced in 2018.

Coastal First Nations, along with the Haida Nation, held a gathering from July 4-6, with provincial and federal leaders, regional leadership and technology partners, to build relationships, celebrate the Connected Coast project and engage around new opportunities for innovation and technology.

Federal Minister of Rural Development Gudie Hutchings traveled with staff to Haida Gwaii, joined by BC Minister of Citizen’s Services Lisa Beare, who brought her mother and daughter for the multi-day event. Chief Donald “Duffy” Edgars and the Old Masset Village Council hosted the ministers on Sunday evening, including a dinner held at carver Christian White’s longhouse with songs, stories and dances. 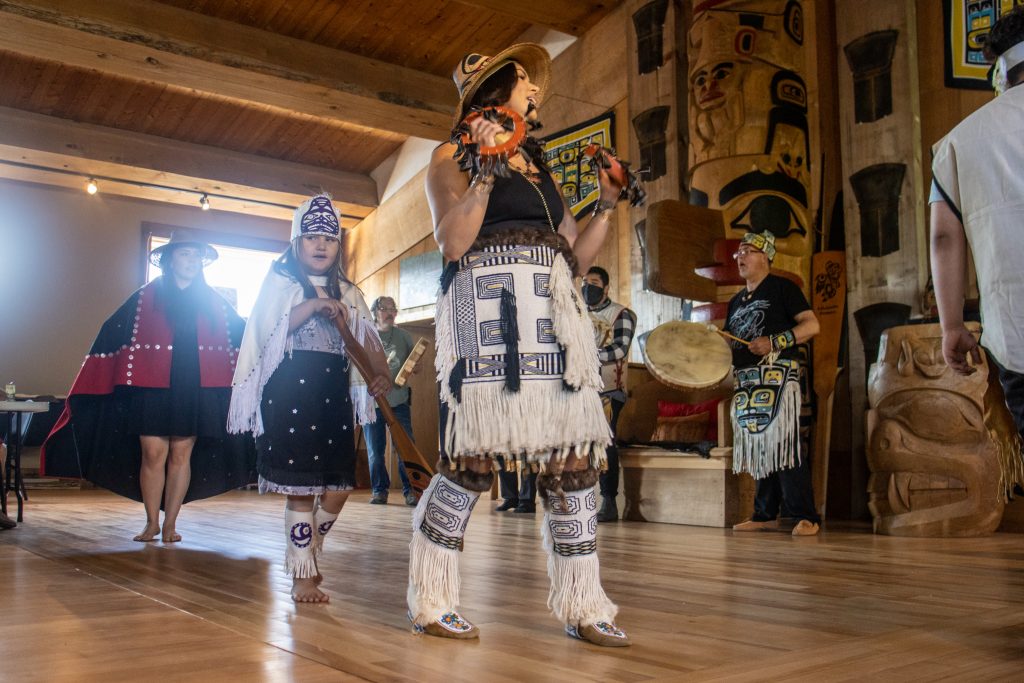 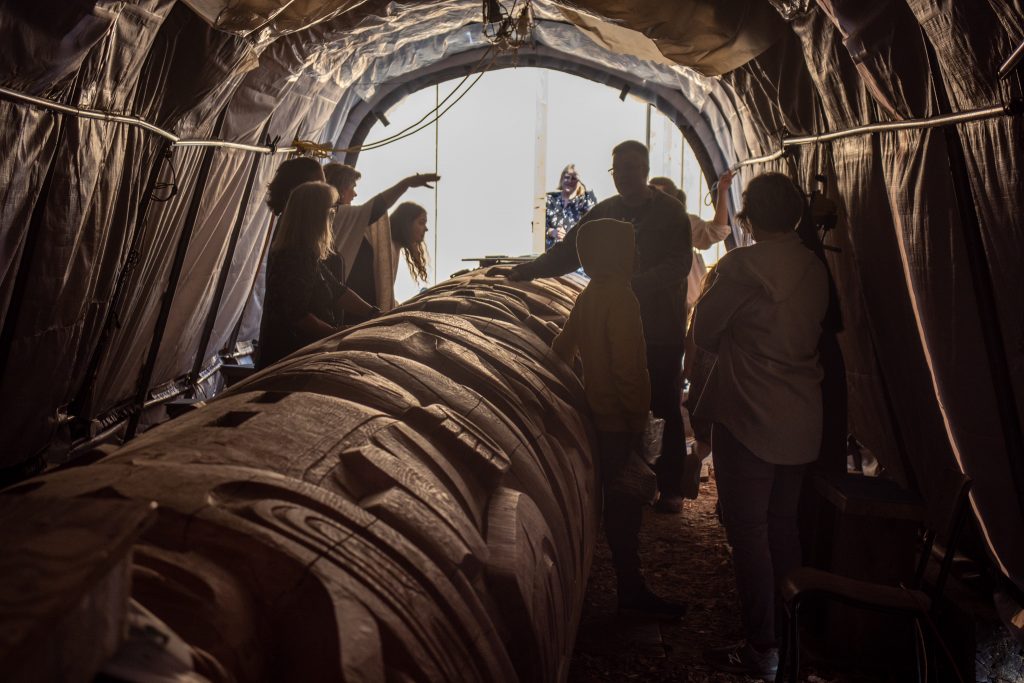 On July 4, the Ministers were joined by local leadership, including BC NDP MLA Jennifer Rice and BC Parliamentary Secretary for Rural Development Roly Russell. The group started the day at the Old Masset Village Council community hall, where President of the Council of the Haida Nation Gaagwiis Jason Aslop celebrated the Connected Coast project and the progress made so far.

“It’s an exciting time, so close to having high-speed Internet in each of our communities. To unlock the potential of connecting our Indigenous communities to showcase our culture, our history, and who we are,” Gaagwiis said. “To transition our coastal communities with economic opportunities, education and training opportunities, benefits for our healthcare system, all of the other potential partnerships and connections we can make with people across Canada and around the world.”

Presently, City West is leading the infrastructure build of the 3.5 million metres of fibre optic cable that will span from Prince Rupert to Vancouver and Vancouver Island, connecting rural communities along the way.

Minister Hutchings said her number one mandate is to “get the country connected.”

“The world is digital, the growth potential is incredible. It’s about the economic activity, the productivity, the growth that can come,” Minister Hutchings said. “The power of groups working together is magical. People need to see the magic, charm, warmth, hospitality, culture you share with us all. The best part is that it gives us connections, now I have a connection with this area and I’ll cherish it for the rest of my life.”

The group traveled from Old Massett south to Skidegate and Daajing Giids, to spread their excitement around investment in connectivity. BC Minister Lisa Beare called the partnerships formed over the project “transformational.”

“We had the opportunity to spend time with families yesterday and my daughter got to play alongside other kids who now get to attend education online, to do telehealth with their doctors if they need a nutritionist or specialists, they get to connect with friends,” Minister Beare said. “My daughter can now Facetime kids here, they can spend time talking to each other, and that’s through these amazing accomplishments that all the partners in this room are achieving together.”

BC NDP MLA Jennifer Rice said she has heard personally about some of the struggles of having limited Internet services on Haida Gwaii. She shared a story of a young woman who failed an exam due to an Internet crash and of an earthquake that took place while she was on island, and the difficulty of organizing safety protocols with no service.

“Reliable high-speed connectivity is a powerful socio-economic driver that supports the delivery of successful and responsive services that people count on,” Rice said. “It’s about fairness. It’s about access to education and the economy.”

Later in the evening, the Ministers and local leadership were gifted paddles from the Old Masset Village Council, which they danced at the Ḵay Llnagaay Haida Heritage Museum before enjoying a fresh seafood dinner. 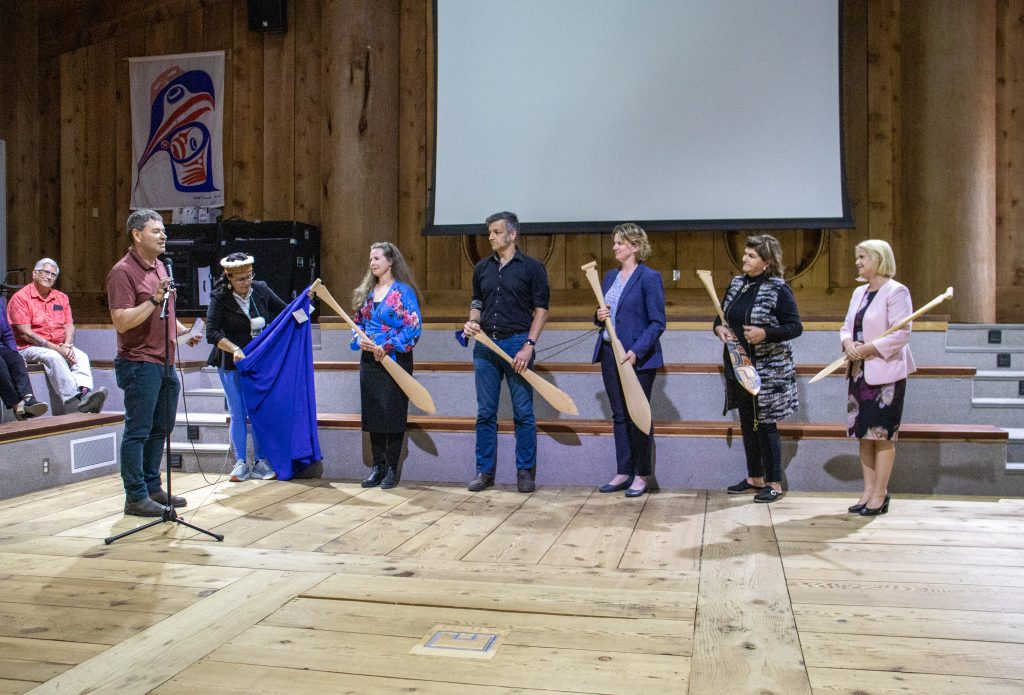 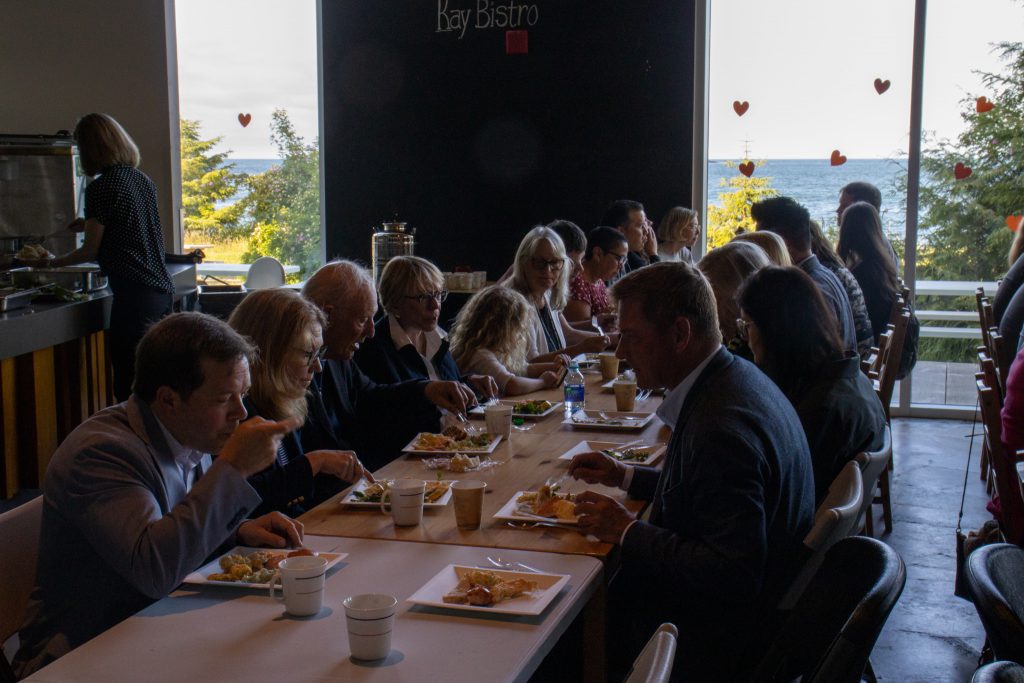 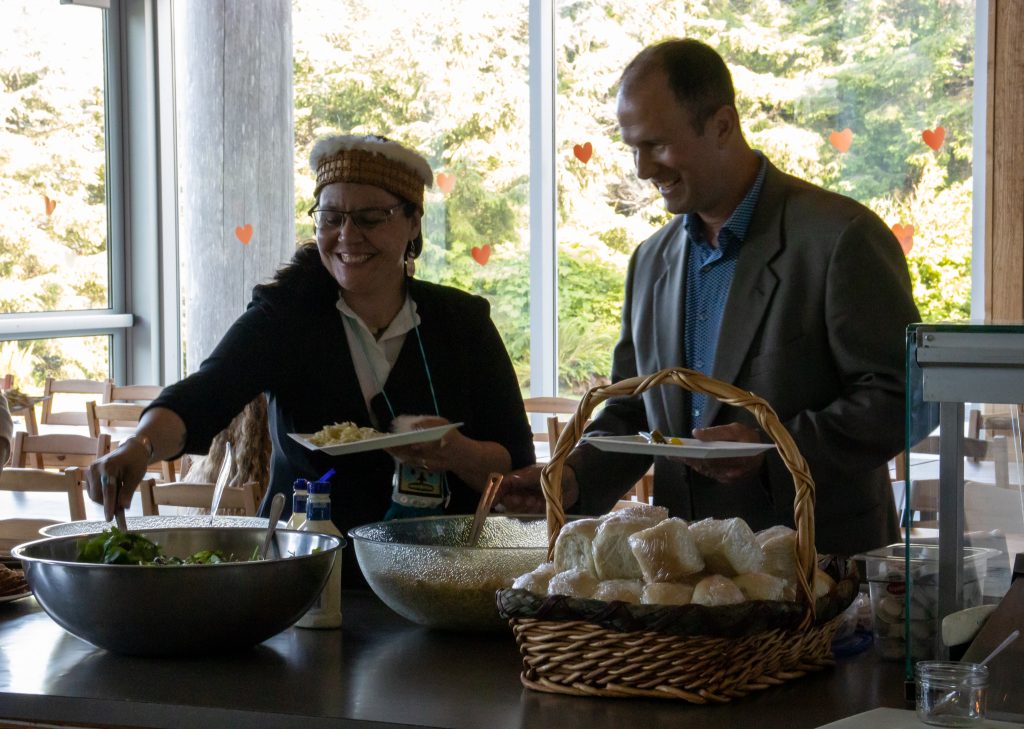 During the three days of activities and conversation, politicians and tech leaders learned about challenges, successes and opportunities on Haida Gwaii, hearing from Hereditary Chiefs, Elders and Knowledge Keepers, as well as leadership from the Council of the Haida Nation, the Old Masset Village Council and the Skidegate Band Council. They traveled by boat to Haina, an Haida ancient village for a cultural tour led by James Williams with Eagle Eye Cultural Tours.

Coastal First Nations is proud to be a part of the Connected Coast project and will continue to report on the installation of the fibre optic cable as it makes its way throughout our communities.