Text and photos by Emilee Gilpin.

Adeana wants to share her story of struggling with mental health—falling down and learning to get back up with support—to inspire others to “never give up hope,” to pursue their dreams and find their voice. While her own personal journey hasn’t been easy, Adeana says she’s picked up many lessons along the way, recently establishing herself within the Canadian political landscape, appointed this year the candidate for the Green Party of Canada in a huge riding in northwestern BC.

Although Adeana has been involved in local politics for more than a decade—as a band councillor, school board trustee, and member of several boards—expanding out and running within a system that at one time intended to eradicate Indigenous cultures wasn’t an easy decision. Choosing which party to support was much easier.

Sitting on a picnic table outside of Ground Gallery & Coffee House in New Masset, Adeana shares how she entered into the world of Canadian politics thinking, “if you can’t beat them, join them.”

“We need to get in there. We need to be heard,” says Adeana, who has been busy with local debates leading up to the snap federal election that reinstated a Liberal minority. “We need voices at all different levels—on the ground, in the House of Commons, in the Senate, in the communities.”

A Haida woman from a matriarchal society, Adeana says she has a responsibility to be a caretaker. According to Haida law, “everything is connected to everything else,” and she sees values of care and respect reflected in the Green Party of Canada. “Mother Nature takes care of us and we take care of her, and we haven’t been taking care of her for quite some time,” Adeana says. “This is an opportunity for us to see how a shift in governance can work. We’re extracting at rates that are not sustainable for the natural economy. And it’s an opportunity to reset the global economy.”

Adeana says the ongoing global pandemic has given the world a lesson from past mistakes and provides an opportunity to “reset” and invest in ecosystem-based management. But the reset can’t just happen on a political level, she says, it needs to happen on a personal level as well—a lesson she learned through her own lived experience.

Adeana also entered into the political arena to amplify the conversation around the importance of mental health, she explains, because it’s a topic she wants to help make accessible to as many people as possible. More resources are needed to support people, she says. Breaking the silence by sharing her own story is one way she’s decided to engage.

“About six or seven years ago, I went on anti-depressants because I was having thoughts of suicide and self-harm,” Adeana says. “We’re born into a world where it’s like you have to wake up, go to work, get a job, pay your bills, do this, do that, and you’re doing it and doing it, and your body becomes accustomed to it, then all of a sudden it’s like—why?”

“Why am I doing this? Why am I working? Why am I so tired? Why do I try? Why do I bother? And lateral violence is alive and well, passive aggression, racism, verbal abuse, emotional abuse, and it all takes a toll,” Adeana shares. She says one day after work, she had “a mental breakdown.” It was hard that her husband and children saw her in that place. She couldn’t sleep or eat, thinking about how life could just continue on without her, as she heard her family’s voices off in the distance.

Her husband sat with her, she says, holding her for hours. “He wouldn’t let me go. He hugged me like a sushi roll, I guess… It was that feeling of having someone there who wants to make sure you’re okay that brought me back,” she says.

Adeana made an emergency appointment with her counsellor the next day. After many conversations, understanding the side effects, exhausting the coping tools she had already learned, she decided to try antidepressants.

“After a certain amount of time, I felt like I was getting better,” she says. “The self-harm and the suicidal thoughts went away. I was feeling happy, but then when I wanted to laugh, it wasn’t a genuine laugh. It wasn’t genuine caring…”

When someone said I love you, Adeana observed that she would say it back but not feel it, just think it. One day, she was driving around town on the wrong side of the road, her mind felt like it entered autopilot, she said, and she knew she needed to do something different.

Her doctor helped her slowly come off the medication, she explains, as it’s “not something you can do overnight.” When she “leveled out,” she started to deepen her understanding of herself, including her triggers and boundaries.

“I started exploring happiness, sadness, what those feelings are, the tension in my body, how I’m smiling, what I’m touching…whether I’m still when I’m sitting, listening, or in a meeting… just really paying attention,” she says.

Adeana says she started to work on not letting one or two bad things control the rest of the day, changing how she thinks and reacts.

“I turned to our cultural ceremonies and practices, embedded myself in my cultural identity, researched my family tree, deepening my pride in being a Haida woman,” she says.

But the more she invested time in her own peace, community and culture, the more resentment she had towards the Canadian government for trying to take it all away. She decided to turn her anger into compassion and deepen her political involvement, after years of working with her Nation, in order to connect to a larger community and amplify her message.

“I’m not going anywhere anytime soon. We are sharing space,” Adeana says. “We need to listen to each other. Sharing my story can help bring people to a place of understanding.”

“I’m learning more about the governance structure, the Indian Act, the way language is written and how to translate that into my cultural teachings and beliefs.”

“It’s time for change,” Adeana says, and she’s not afraid to fight for it.

“Being the lowest of the low, coming from a place where I thought I had no worth and no reason to exist, to where I am today…I hear stories of people, and the needs required to live a healthy life, and I have this opportunity to bring people together, to make informed decisions, to stand together.” 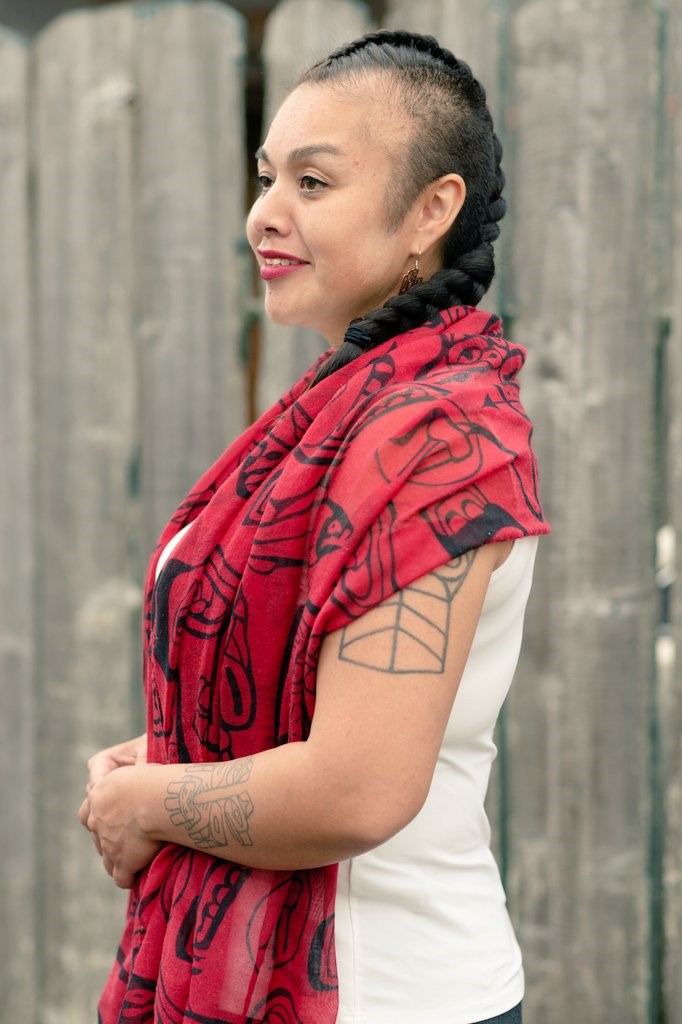