Over his 20-year career of championing the wildlife of the Great Bear Rainforest, Kitasoo/Xai’xais Stewardship Director Doug Neasloss likes to say that he started out as a creek walker trained to stay away from bears, and then became a wildlife guide hired to chase after them.

His first real introduction to the grizzlies, black and white Spirit bears of the Central Coast came at 15 years old, when he was hired to walk the river systems of the Great Bear to count salmon several times a year. At the time, creek walkers were obligated to take bear safety training provided by the federal government.

“I took a course through a guy who was an ex-trophy hunter who had a very aggressive approach toward bears. He would say ‘shoot’em first and ask questions later,’” Neasloss remembers. “He would show us photos of people getting mauled. So you came out of his course terrified of bears.”

Two years later, when 17-year-old Neasloss was hired as a wildlife guide for a nascent Klemtu tourism business, he would be surrounded by bear experts such as elder Charlie Mason, a hunter and fisherman, and bear biologist Wayne McCrory. Both would train him in a new approach.

“The first time I met Wayne, he said ‘leave the gun in the boat. I’m going to introduce to you a different way to understand bear behaviour and how to read them,’” says Neasloss. “We really spent a lot of time studying bears. How to react, what they do, how to predict some of their movements. It was a totally different way of working with bears and wildlife.”

Through the leadership of the Kitasoo/Xai’xais Economic Development Corporation, Klemtu Tourism was established in the mid-90’s with a handful of employees. A tourism consultant was brought, hired Neasloss, and “the rest is history. We slowly started to build a business.” The journey to get there was not an easy one.

“I’ve always just wanted better for our little community. I think we live in a very special place, a very remote place. To me, it’s one of the last intact places left on our planet and I’ve always wanted to create something that was long-term and sustainable,” he says. “Traditionally our small communities have always been dependent on resource extraction and I’ve always believed we could develop a sustainable economy.”

Transitioning From a Resource Extraction Economy 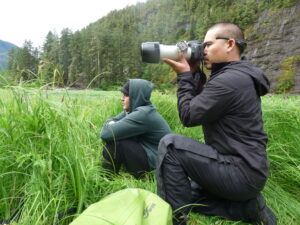 The 90’s were a turbulent time for coastal First Nations communities as industrial logging and commercial fishing were rapidly depleting local resources, leaving unemployment in Klemtu at an all-time high. They were also formative years for a young Neasloss.

“I remember the mid-90’s when the government gave out all of the tenure to log the Great Bear Rainforest and a big chunk of that was going to be in our territory,” he recounts. “The forestry companies started coming in and punching roads through and I remember it led to a lot of environmental groups coming up and tying themselves to trees and shutting down the forest operations.”

“I remember thinking at that young age that there’s got to be a better way. There’s got to be a way you can generate revenue without cutting down trees. And to me, tourism was one of the industries, where I saw that you were able to do that.”

The Nation’s Economic Development Corporation was created with the mandate to create one breadwinner per household to create a long-term sustainable economy for the future. “We knew we had to diversify and not depend on one industry. So we decided to get involved in a number of things, including tourism,” says Neasloss.

“When we first started people were very skeptical about tourism. It was a completely new industry, a very foreign concept here,” he explains. “There were no examples of tourism at the time and I remember at our first few meetings there were some very legitimate questions from the community. The biggest question was, ‘Am I selling my culture?'”

When leadership held a community vote to decide on tourism development, the majority of members were still not convinced.

“I remember begging the community to think about our future because I thought those days of commercial logging and fishing were over,” says Neasloss. “Through the Great Bear Rainforest Agreement in 2000, we had just set aside more than half our territory in protected areas. We weren’t loggers, we’ve never been loggers, so I asked them to think about a new future.” 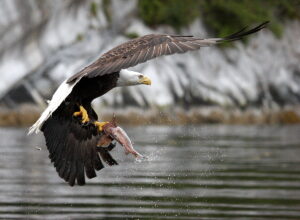 Neasloss gave presentations to show the community his photos of the territory. “I was in love with it. I knew we had something special – and I just thought that was going to be our future.”

“It was super powerful and we were given the mandate to proceed, with two conditions,” says Neasloss. Tourism was not to be about money but about slow and steady growth, and the community and youth must be involved. “We were able to set some ground rules with the community about the do’s and don’ts of tourism,” he explains. “We wanted to be respectful to the culture and the community and make sure people knew there were cultural rules that we expected them to follow.”

When Neasloss went directly into tourism work from high school, he would be there for the next 11 years. “It was trial by fire, for sure.”

“One of the hardest things was that we didn’t know anything about running a business. We were trying to develop something that was a brand-new concept up here and there were no examples that we could look to.”

“We lived in a very remote area so our costs were quite a bit higher. We didn’t have a big budget for marketing. We didn’t have the proper infrastructure like proper boats or hotel,” he says. “We didn’t have proper cooks – I used to be a cook and I can barely eat my own cooking, let alone cook for other people.”

Klemtu Tourism began offering community walking tours for passengers visiting aboard a new BC Ferries sailing to the community. “Sometimes our guides would outnumber the clients, so it was a losing proposition for us,” says Neasloss. When a boom in recreational paddling was predicted, the company switched to kayaking tours. “I’d never been in a kayak in my life and here I was leading tours around the territory. More often than not, I was the slowest kayaker, telling the clients to slow down and wait for me,” he laughs.

It was extremely hard work. Guides were paddling 12 hours a day, local operators were slashing prices to compete, and Klemtu Tourism was barely breaking even. In 1999, the company decided to revamp its operations, rebrand its image and branch out into a new direction.

For the next eight years, it would slowly build a world reputation for Spirit Bear Adventures, offering wildlife tours with a cultural component to showcase Kitasoo/Xai’xais culture and one of the last pristine, intact temperate rainforests on the planet.

“In 2007, we built Spirit Bear Lodge and it tripled our capacity. We bought a fleet of boats, trained hotel staff, brought in gourmet chefs, trained a number of guides, hired an expert marketer and rebranded the name to Spirit Bear Lodge,” says Neasloss.

Business doubled yearly as the company marketed the lodge experience. “We went through huge changes, from three or four people involved in start-up to now close to 40 people involved in tourism, with around the $2.5 million mark in revenue today,” he says.

Two decades later and Neasloss says community support for tourism is at 110 per cent. “Almost every family is involved in tourism in some way, whether as a boat operator, tour guide, hotel staff or in marketing. It’s the second-biggest industry here and an extremely important one for the community.”

In addition to jobs, tourism brings benefits that are often overlooked, according to Neasloss. “One of the biggest benefits is that our people get paid to be themselves. They get paid to interpret who they are and where they’re from and to share their culture and their stories and the wildlife.”

“Secondly, the diversity we get with the people that we hire is super amazing,” he points out. “Resource extraction industries are very male-dominated and in tourism we can hire men, women and children. We have a youth dance group that is 100 per cent youth-led and they are tied to the tourism operation.”

As Spirit Bear Lodge was attracting tourists from around the world to view bears, every year 250 of BC’s 15,000 grizzlies were being killed by trophy hunters. “Several times in my guiding career, we’d come upon a dead bear,” says Neasloss. “And the bear would have no head or no fur. Someone would take it for sport, for their mantelpiece or a rug.” 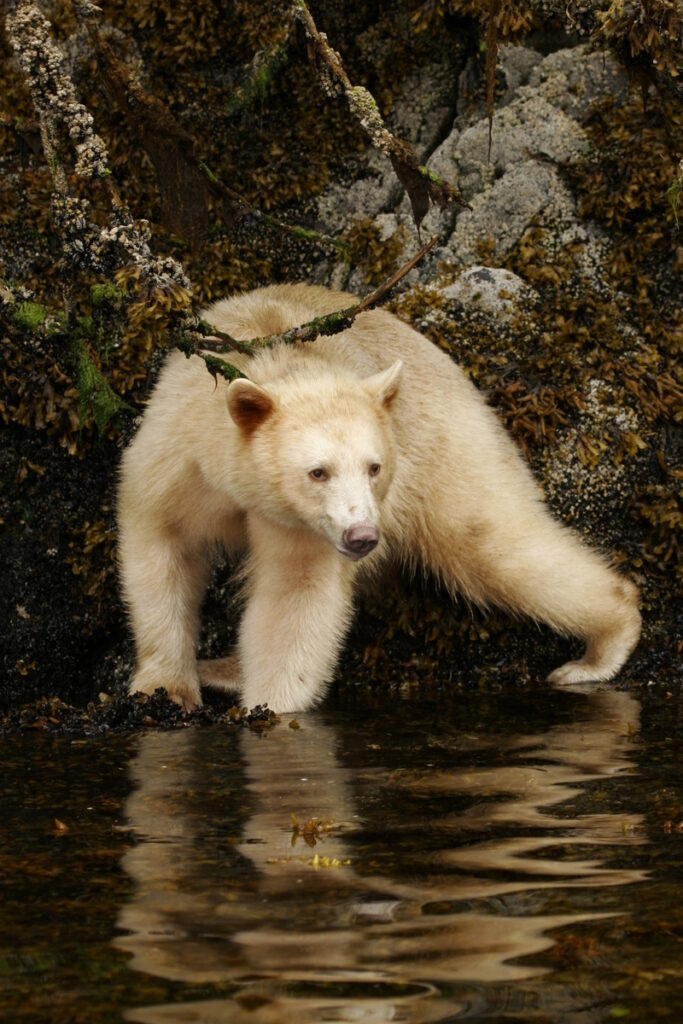 In 2012, Neasloss and a group of emerging young Central Coast leaders assembled what Neasloss calls, the “Dream Team”– William and Jess Housty, from the Heiltsuk Nation, Megan and Jason Moody from Nuxalk, and Jennifer Walkus and Danielle Shaw from Wuikinuxv. They were determined to stop the grizzly hunt and find ways to more deeply incorporate Indigenous values into management of their Territories.

“We wanted to do something; we didn’t want to just talk about it or just issue a statement. We had our first brainstorm session and we thought about what we could do differently. We realized that First Nations had never been involved in wildlife management and Indigenous laws had never been incorporated.”

The team held its first fundraiser, raised about $1/2 million and sent out a press release issuing an outright ban on trophy hunting based on Indigenous laws. They commissioned an economic analysis that “blew the government numbers out of the waters”, showing that bears were worth more alive than dead – $15.2 million in wildlife tourism compared to the government’s $1.1-million for hunting activities. The team put up ‘No Hunting’ signs in the territories and produced a film.

“We took Bear Witness on the road and did lectures. We were at universities and colleges, farmers markets, Science World, everywhere. You name it, we were there,” Neasloss remembers.

In 2017, the NDP provincial government pronounced a moratorium on grizzly bear hunting in the Great Bear Rainforest. The black bears – that can carry the recessive Spirit Bear gene – remain unprotected and Neasloss says, “Guaranteed that is still on our list to work on.”

Looking to the Future 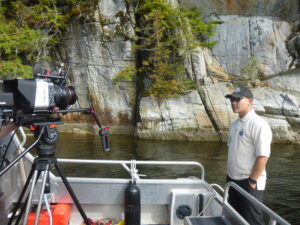 As CFN celebrates its 20th Anniversary this year as an alliance of coastal communities, Neasloss has big hopes for the future.

He wants to see CFN’s mandate realized. “I hope we come to a point where we have a sustainable economy and stronger stewardship. And that we build a whole new generation of stewards in our communities in one of the most unique places on the planet in the Great Bear Rainforest.”

As a former Chief of the Kitasoo/Xai’xais and now Stewardship Director, Neasloss encourages Indigenous youth to get involved in leadership roles and offers this advice. “Speak from your heart and I don’t think you could ever go wrong. Be ambitious and hungry but remember change doesn’t happen overnight, it’s a lot of hard work.”

Neasloss wants to see educational opportunities expanded for youth to prepare them to be the next leaders and scientists to implement stewardship of their territories. “I think everyone has a vision of how they can advance their community and First Nations. The next generation is going to have to carve out a future that will work for them. The only way things are going to be better is if we get in there and change them and create the world we want it to be.”